Hefty acquisition costs and bad blood with Samsung have left CJ Group pondering how to overcome the multiple hurdles it faces as the preferred bidder for logistics giant Korea Express, industry watchers said.

At the top of the agenda is addressing industry concerns that CJ would have a tough time coming up with the roughly 2 trillion won ($1.8 billion) it proposed for the acquisition.

Another is the mounting opposition from Korea Express, whose union said it would bar the acquisition by CJ at all costs.

The main concern that the union has is job security.

CJ Group, as the operator of logistics arm CJ GLS, will no doubt have to trim some of the workforce if GLS is merged with Korea Express, according to the latter’s union.

The union previously supported POSCO as the more compatible match for Korea Express.

The union is also raising concerns of financial problems, such as the possibility of CJ having to sell off assets to pay Korea Express’ creditors.

CJ Group had proposed buying Korea Express for 215,000 won per issue for a 37.6 percent stake in the company.

The company currently has about 560 billion won in cash and stocks, and some 400 billion won worth of real estate.

The rest would have to come from both capital increases and loans.

Lee Gwan-hoon, CEO of CJ Group on Wednesday addressed the union’s concerns, saying CJ would not be undergoing job cuts after the acquisition.

“We guarantee job security for the high-caliber workers of Korea Express and will work closely with the union,” Lee said at a press conference. 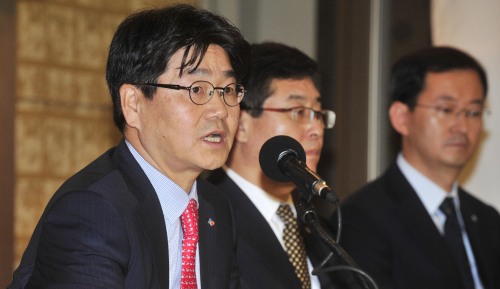 CJ Group CEO Lee Gwan-hoon speaks at a hurriedly-arranged news conference in Seoul on Wednesday. (Park Hyun-koo/The Korea Herald)
He added that CJ is aiming for a 20 trillion won logistics business by 2020, and that the company would look for other global companies for M&As.

Samsung Securities had been sales advisor for CJ before Samsung SDS jumped into the race by partnering with POSCO.

The consortium was defeated by CJ.

But CJ’s sense of betrayal had intensified because of its familial ties with Samsung, according to industry watchers.

CJ Group Chairman Lee Jay-hyun is a cousin of Lee Jae-yong, president of Samsung Electronics and heir to Samsung Group.

Last month, Kim Heung-chang, head of CJ CheilJedang, one of the group’s flagship affiliates, stepped down after just half a year in office.

Another executive who headed CJ E&M’s game division also resigned after a year and five months.

Two other chief executives at key CJ subsidiaries also tendered their resignations after less than a year in office.