The Korean CCM band was formed in 2003 for a “culture ministry” through which they help lay believers lead a “Christian cultural life” with easy-to-follow contemporary melodies and lyrics.

The CCM band has released eight albums in total and four of them are live worship albums, recorded live during their Thursday services.

“As the service has become so successful with so many people, we came to a conclusion that we need a break. We’re not having a service from August but are planning to go overseas to offer English services from the second half,” Shim Jong-ho, worship leader of Markers, said in an interview with The Korea Herald. 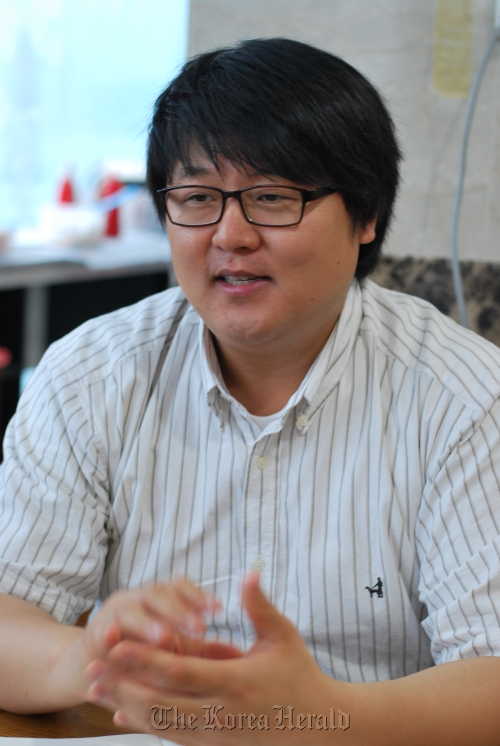 Markers worship leader Shim Jong-ho speaks during an interview in Seoul on Thursday. (Markers)
“We’ll start off the tour for English-speaking Christians in Southeast Asia. With hallyu becoming more popular, we may offer worship services in Korean language,” said the 32-year-old, who recently went to Western areas of the U.S. to hold 13 worship services for Korean Christian communities for 16 days.

The most famous song by Markers is “Bureushin Goseseo,” or “At Where You Called,” of the second live worship album.

The group released a fourth live worship album in April and the summer vacation might be good timing for the promotion of albums. However, Shim said the group decided not to because the group needs maturity rather than popularity.

Shim attributed the rapid growth of the band’s popularity to people’s easy access to YouTube videos that showed their Thursday worship services.

“We estimate that about 30,000 people watch our service through online video clips and that really helped us become known to people,” Shim said.

Shim, being a lay believer himself and not a theology major, acknowledged that his leading of a Christian music band might face challenges, but the band is under the guidance of Pastor Kim Nam-guk of Junahim Church.

Markers also has close relations with other popular Christian bands such as Anointing, Disciples and Yesujeondodan to encourage each other for a common purpose of spreading gospel, Shim said.

“People look at us as if we’re competing against each other for larger CCM album sales. But we should not do so,” he said.