An American professor has brought the classical novels of the novelist Park Ji-won of the Joseon period onto the global stage by translating ten short stories into English.

Emanuel Pastreich, who goes by the Korean name Lee Man-yeol, recently published two books in English with Seoul National University Press: “The Novels of Park Jiwon” and “The Observable Mundane, a study of Japanese Chinese novels. He expanded parts of his dissertation on how Chinese vernacular literature impacted Korean and Japanese literature and expanded it into two separate books. 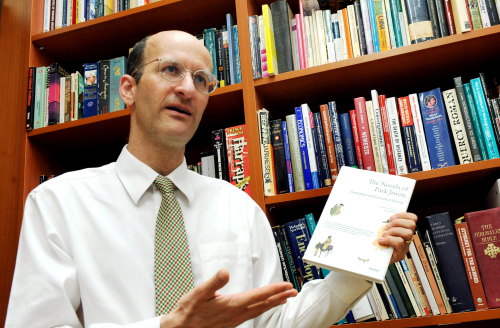 Professor Emanuel Pastreich, director of the Interdisciplinary Studies Program of the Kyung Hee University (Park Hyun-goo/The Korea Herald)
One side of his room is filled with Chinese and Japanese classic literature books, mostly from the 18th and 19th centuries. “I have put much work into researching literary relations between China, Japan and Korea and I think the topic is critical to our understanding of the region,” he explained of his work.

His devotion to East Asian culture and literature began when he chose Chinese literature and language as an undergraduate at Yale. “I was fascinated with Chinese characters. There’s something artistic about them,” he remarked.

Pastreich was motivated to study Chinese by “a combination of the fun of learning Chinese language, an interest in traditional Chinese culture and a feeling that China would become an important country in the future.”

That was in 1983, but back then East Asian language and literature was not a very popular major in the U.S.

“My major has only three students that year,” he said.

In his senior year, Pastreich was drawn to Japanese literature and later thought he should know Korea in order to understand the full history of literature in Asia. While writing his Ph.D. dissertation at Harvard University in 1994, he came to Seoul National University in 1995 for a year.

That’s when he discovered “great richness in the Korean tradition” and met his wife, who was a student of Korean music. Two years later they were married and his father-in-law gave him the Korean name “Lee Man-yeol,” similar in pronunciation to his name Emanuel., but featuring his wife’s surname “Lee.”

He speaks Korean fluently, although he remarks that he’s still more comfortable speaking Japanese. Nevertheless, Pastreich is fluent enough to carry on discussions with his students in Korean and often writes articles in Korean which he posts on his blog.

Pastreich became the director of the Interdisciplinary Studies Program at Kyung Hee University this semester. He is using the program as an opportunity to encourage cooperation between the humanities and the sciences. In his “Technology and Society Forum” class, he encourages students to discuss comprehensive issues such as how smart phones have affected our society. He carries on detailed discussions via his blog with the students.

His latest challenge is to go beyond the combination of different academic fields, experimenting with innovative new approaches to teaching. He is exploring different approaches to make students comfortable talking in class. “You cannot expect them to talk in class. You have to create an environment,” he explained. “Korean students have good basic knowledge of facts. However, in class, some of them are not focused and sometimes they are not serious. Once you get them involved, however, they have lots to say and are often thoughtful.”

With those challenges in mind, Pastreich plans to go back to his original major of literature and teach a comparative literature class and class on novelist Park Ji-won next semester.

His book launch will be held at the Paik Hae Young Gallery in Itaewon on June 30 at 5 PM. His books are also available at Kyobo bookstore and Amazon.com.