With the unveiling of nine graphic images that will adorn every cigarette pack sold in the U.S. from the fall of 2012, government officials and outside experts predict there will be an initial wave of smokers seeking help in quitting.

The U.S. Food and Drug Administration says the graphic labels released Tuesday are “an important and powerful tool” in the fight against illnesses and death caused by smoking. FDA commissioner Margaret Hamburg estimated the new campaign could induce as many as 213,000 of the United States’ 46 million smokers to quit in just the first year of the campaign. In Korea, a bill to introduce similar warnings has been stuck in the National Assembly for four years, with little prospect of making progress soon.

The images chosen by the FDA ― the first change to cigarette-package warnings in 25 years ― are stark and often disturbing. They are captioned with simple text telling cigarette buyers about the known consequences of their habit. One appears to depict a recently autopsied cadaver and states simply, “Smoking can kill you.”

Another, set against the warning, “Cigarettes are addictive,” shows a man blowing cigarette smoke out of the tracheostomy hole in his throat. 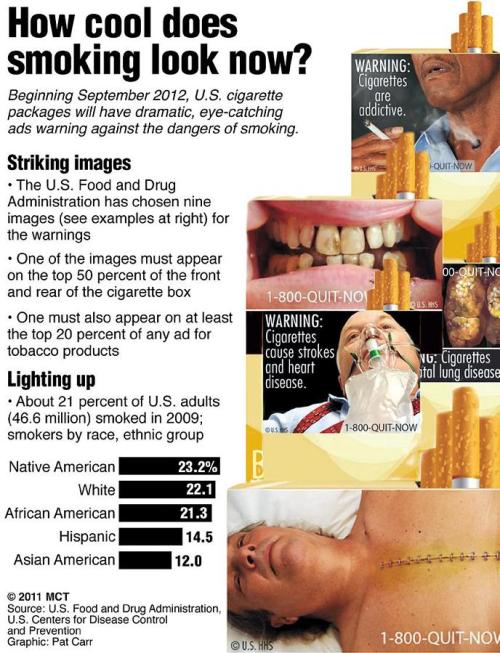 Examples of new warning labels, which contain striking images of the effects of smoking on health, that must appear on all U.S. cigarette packages and ads starting September 2012. (MCT)
Other warnings appeal to smokers’ concern for those around them. Research has found this approach to be highly effective in getting smokers to try to quit. In one, a photo of a distraught woman bears the warning, “Tobacco smoke causes fatal lung disease in nonsmokers”; in another, a toddler clutched to the chest of an adult watches a nearby swirl of smoke, accompanied by the message, “Tobacco smoke can harm your children.”

In another message, a strapping 30-something-year-old with a sharp-looking goatee and determined stare pulls open his shirt to reveal a T-shirt that declares, “I Quit.” The text reads, “Quitting smoking now greatly reduces serious risks to your health.”

The new initiative is the most dramatic of the steps taken by the FDA since the 2009 Family Smoking Prevention and Tobacco Control Act gave the agency expanded regulatory powers over tobacco. It is also the first time in 25 years that the health warnings on the packaging of tobacco products have been updated beyond the bland statement, in small type, that the Surgeon General of the United States has determined cigarette smoking to be harmful to human health.

In requiring the graphic warnings, the United States joins some 40 other countries around the world that already require cigarette packaging to carry warnings on the dangers of smoking. Canada and Europe pioneered the practice, and several developing countries, including Mauritius, Uruguay, Thailand, Malaysia and India, also preceded the United States in requiring such graphic anti-smoking messages.

So, how is Korea doing?

Korea, a member of the World Health Organization Framework Convention on Tobacco Control, is scheduled to host its general congress next year. It too is broadening its anti-tobacco campaigns.

The Ministry of Health and Welfare earlier this month launched a catchphrase, “No smoking is common sense, even if no one tells you so.” A total of 340,638 spots nationwide, including Seoul, Gwanghwamun and Cheonggye plazas in central Seoul, are designated smoke-free areas. A free call center is in operation to help smokers ditch their cigarettes while local public health care centers monitor those in need of around-the-clock advice.

But the government has not managed to deliver stronger regulations on the manufacturing or distribution of cigarettes.

The cover of each packet of cigarette has a warning that smoking could harm the user’s health but the government hasn’t managed to add a picture or a stronger warning sign. A bill to do so has been pending at the National Assembly since 2007 but no one has dared to “put a bell on the cat,” since tobacco firms are one of the largest sponsors of lawmakers, claim civic activists.

“In Korea, tobacco is still considered more as a business industry than a sin factor and is rather protected and encouraged,” said Park Jae-gahb, chief director of the National Medical Center, in a previous interview with The Korea Herald.

“But it still does not overshadow the fact that cigarettes are deadly,” said Kim Eun-ji, secretary general of the Korean Association of Smoking and Health, said.

Tobacco is suspected of causing infertility in women and raises the risk of fetal deformity during pregnancy. The WHO estimates that it kills 5 million people worldwide each year.

A single cigarette contains at least 250 harmful chemicals, more than 50 of which cause cancers of the mouth, brain, lung, breast, bladder, stomach and other parts of the body, and smoking is linked to coronary heart disease and many other fatal disorders.