[ The Korea Herald – Send E-mail ]
Standing desks rise in popularity
By 배지숙
Published : Jun 23, 2011 - 19:32
Updated : Jun 23, 2011 - 19:32
WALNUT CREEK, California ― Last year, Kerri Campbell made a decision: She would no longer sit at her desk eight hours a day. Today, the retail broker for Daymon Worldwide in Pleasanton, Calif., stands on a couple of black pads, each about an inch think. Her keyboard is on a wooden stand built by her husband, and her monitor rests at eye level on a box, a hard drive dock and a ream of paper.

It’s nothing fancy, she says, but this do-it-yourself workstation has changed the way she feels at the end of the day. She has more energy, she says, and feels more fit.

“I think standing is a more healthful way to work,” she says from her quiet office.

Like many people with desks that allow for standing, retail broker Campbell isn’t motionless while she works. She does little knee lifts, shifts her weight around and, well, fidgets more.

Recent articles in the New York Times and other publications have been shedding light on the conclusion Mayo Clinic Dr. James Levine makes in his 2009 book “Move a Little, Lose a Lot” ― sitting all day at work and all night in front of the television, not to mention your commute, can be harmful. 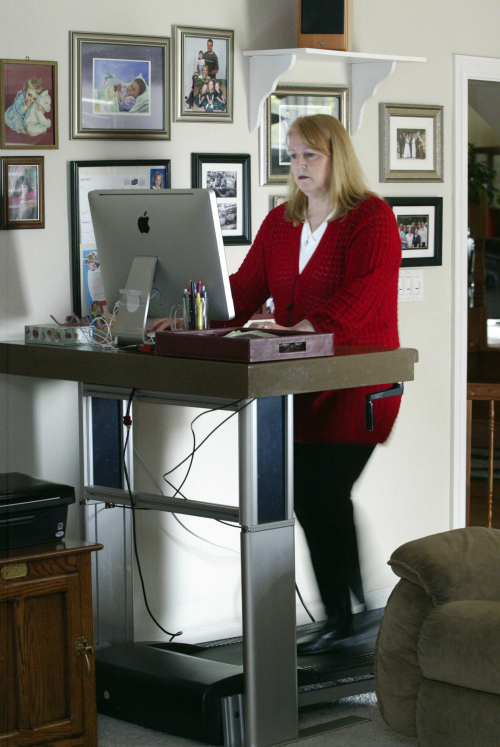 Mary Gagnon uses her treadmill desk at home, in Danville, California. (Oakland Tribune/MCT)
Not only is it a likely contributor to the nation’s obesity problem, the doctor says, but it could be killing us. Physical inactivity, like sitting in one place for hours on end, cuts calorie-burning rates and puts the body into storage mode. While standing can also be static, the very act of being on your feet promotes more movement throughout the day as you shift from foot to foot or easily transition to walk around the office.

The response to Levine’s bell-ringing has been swift, especially from workers who sit all day at computer stations. Dan Shafer, owner of the Los Gatos, Calif.-based ergonomics consulting and training firm VocSolutions Inc., says his phone has been “ringing off the hook” lately with people asking about turning their workstations into “sit-stand” desks.

John Mele of MB Contract Furniture of Benicia, Calif., which provides offices with desks and chairs, says there’s a growing interest in the variety of adjustable desks he sells.

“The response we get is people usually love them,” Mele says. “They are a big part of our industry, and I think it’s going to be growing.”

Standing for work is nothing new. Standing desks were used by the wealthy in the 18th and 19th centuries and, historically, legal scholar and former Supreme Court Justice Oliver Wendell Holmes, Jr. wrote many of his Supreme Court decisions while standing. Standing Desk Headquarters, an online clearinghouse for all things related to the desks, claims they were also used by Thomas Jefferson, Winston Churchill and Leonardo da Vinci.

While we may never know why Leonardo da Vinci preferred to stand while working, modern-day workers have turned to standing desks traditionally to alleviate pain from long hours of sitting or injury.

“Sitting is actually hard on your back,” says Steve Meagher, a physical therapist, ergonomist and owner of Site Solutions of Orinda. “The idea is if you’re standing, you’re decreasing stress on your back because you are lining the spine up.”

Standing at work has helped Dagmar Slovak with her neck problems. Slovak, an administrator for Orinda, Calif., Community Church, recently purchased a standing desk from Amazon and alternates between sitting and standing during the work day. Her neck hurts less, and there’s an added benefit ― more energy.

“Before, after a long day in the office, I just wanted to get home and rest on the couch,” she says. “Now I actually go to the gym or walk around the reservoir with my friends. I tell people how energized I am, and I really think it has to do with not sitting all day long.”

Mary Gagnon of Danville, California, goes several steps further with her standing desk ― literally ― by walking on a treadmill while she clicks on Web pages and types business email.

Gagnon learned about treadmill desks when one of her employees requested a desk for health reasons. Gagnon works long hours and hates going to the gym. Buying her own treadmill desk was the perfect way to exercise without really thinking about it, she says. She ordered her desk, which start at around $1,600, about a year ago.

“I really like it ― I feel like I am multitasking,” she says. “Now if I just sit all day I feel lazy.”

Although he’s receiving many new inquires about standing desks, occupational therapist Shafer of VocSolutions says the biggest reason more people don’t already have desks that allow people to do work both sitting and standing is cost. A basic desk for standing starts at about $250, but an adjustable one that promotes the more healthful activity of both sitting and standing has springs, cranks or electrical components that can bump up the price into the thousands of dollars.

“If they were inexpensive,” Shafer says, “I think everyone would have them.”

It’s not a difficult concept to raise a computer monitor or keyboard a few inches or feet to allow for standing, but typically people who make do-it-yourself standing desks don’t raise their monitors high enough, Shafer says, and end up hunching down, creating another set of problems. The right standing desk allows for your arms to be at 90 degrees while typing. A computer monitor should be at eye level.

“It’s a laudable effort to try to build your own standing desk, but you have to make sure you are doing it right if you are going to do it at all,” Shafer says.

And people who switch to standing desks can’t just stand statically. They have to move around or risk extreme muscle fatigue.

“The best of all worlds is to adjust your postures frequently and move between sitting and standing with regularity,” Shafer adds. But for those who can’t incorporate a standing desk into their work lives, just moving more during the day can help improve health, he says.

“Movement is critical,” Shafer says. “There’s a big barrier to getting a $1,200 table in someone’s office, but doing things like taking a walk during your lunch break or pacing while on the phone, anyone can do.”

Here are some ways to incorporate movement into your workday from occupational therapist Dan Shafer of VocSolutions, Inc.:

_Drink many glasses of water a day. Not only is water good for you, but the trips to the bathroom get you moving.

_Position your printer away from your desk so you have to get up to retrieve your work.

_Stand while talking on the phone if you can.

_Stand to greet people who come to your desk or office and try to have conversations with co-workers while standing.

_Park far away from the front door of your building.

_Choose to walk over to and talk with co-workers rather than send instant messages or email.

_Build a walk into your lunch break.