From the moment Broccoli, You Too was formed, the indie band has been seeking unconventionality in every aspect.

The name of the band is the result of brain storming of untraditional words combined in a strange way. 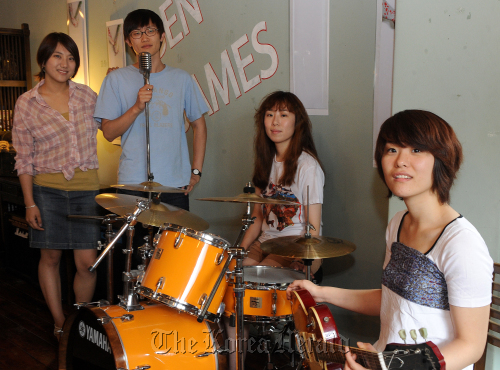 Indie band Broccoli, You Too members during an interview at a cafe in Seoul on Monday: (From left) Jandi on keyboards, Dukwon on vocal and bass, Ryuji on drums and Hyanggi on guitar. (Lee Sang-sub/The Korea Herald)
“So, among many candidates, we came up with a sentence, ‘Broccoli Soup With Big Pieces, You Too Are Tasteless.’ Then, we shortened it,” he said.

The act consists of four members ― Dukwon on vocal, Jandi on keyboards, Hyanggi on guitar and Ryuji on drums. Dukwon is the oldest, 29, and Ryuji, the youngest, 25.

Often, aspirant rock stars dream of becoming musicians from childhood, master a musical instrument and join a lot of bands before making an official debut in the music market.

Broccoli, You Too is the first band for all four members and they have rarely performed other musicians’ songs.

“I became interested in playing the guitar when I went for church training while I was a high school student. Since then, I saved pocket money to buy a guitar and taught myself,” said Hyanggi, 26, who was shy about her guitar skills.

Immediately sensing her humility, Dukwon laughed, saying: “What are you talking about? Your guitar playing was like a new world to us.”

Jandi, who has been playing classical piano since childhood, joined a school band at SNU. She worked as a nurse at a hospital for two years even after she joined the band but quit the job two years ago. Drummer Ryuji started learning drums when she was a senior in high school and joined the band at the age of 22.

Their 2007 debut EP album “No Encore Accepted” became the talk of the Hongdae scene and their first studio album “Universal Song,” released in December 2008, helped them gain mainstream popularity.

The charm of the first album was sensitive and poignant lyrics flowing on simple musical sounds. Songs such as “Universal Song,” “Citron Tea” and “No Encore Accepted” became the major repertoire for the act’s at music festivals including Grand Mint Festival.

Many reviewers have said the band’s lyrics are quite emotional but Dukwon doesn’t agree.

“Emotional? It’s the opposite. My lyrics are very logical and to-the-point. If you write something really emotional at night and read it in the morning, you would feel really embarrassed. So I don’t write lyrics emotionally,” Dukwon said.

“Maybe people who listen to our music are emotional.”

Broccoli, You Too’s sophomore studio album, “Graduation,” (2010) became weightier in sound and more serious in lyrics. The title song “Graduation,” talking about how “this crazy society has forced youth to go on overseas language studies and the current generation to be addicted to only mating,” was banned from state-broadcaster KBS.

The band on Saturday joined an SNU rock festival, which was put on to protest the school’s forthcoming incorporation.

“We’re not making all-out efforts to voice our opinions on social issues but we don’t really have to be too worried about what other people might think about us,” Dukwon said.

“In fact, all human behavior has to do with politics one way or the other,” Hyanggi said.

The act is currently staging three concerts per week, as part of their summer concert project “Early Tropical Night” at Sangsang Madang Live Hall in Hongdae through July 3.