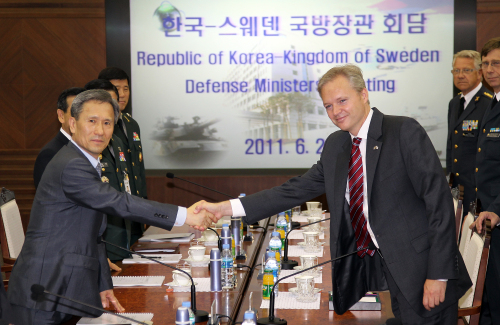 Defense Minister Kim Kwan-jin (left) shakes hands with his Swedish counterpart Sten Tolgfors prior to their talks in Seoul on Tuesday. (Yonhap News)
The two sides agreed to hold a regular consultative meeting of senior-level officials to bolster defense cooperation. The first meeting is set to be held in October when the International Aerospace and Defense Exhibition opens here.

Sweden also agreed to send one professor to the peacekeeping operation center of the Korea National Defense University as part of efforts to deepen bilateral military cooperation.

On the occasion of the 61st anniversary of the outbreak of the 1950-53 Korean War, Kim expressed gratitude for Sweden’s support for South Korea during the fratricidal war.

Sweden was the first country to send medical staff to support South Korea during the war. It has also dispatched its military staff to the Neutral Nations Supervisory Commission at the inter-Korean border village of Panmunjeom.

Kim also asked Tolgfors to support South Korea while expressing thanks to his country for backing the South over the sinking of the Cheonan and the artillery attack on Yeonpyeong Island.

Tolgfors asked Kim to visit his country and Kim said he would check when it would be the proper time for his visit to Sweden, officials said.