[ The Korea Herald – Send E-mail ]
Lee Dong-gook and Jeonbuk Motors set sights on league title
By 로컬편집기사
Published : Jun 21, 2011 - 18:17
Updated : Jun 21, 2011 - 19:23
It has been a topsy-turvy season in the K-League so far. Asian champion Seongnam Ilhwa Chunma has been kept off the bottom of the standings only thanks to the dreadful form of Gangwon FC. Suwon Bluewings finds itself in one of its annual slumps while in-form champion FC Seoul has improved since earlier in the season but still can’t quite break free of the middle level.

One team though has been head and shoulders above the rest for much of the current campaign and that is Jeonbuk Motors. The team from Jeonju has found a level of consistency that the other 15 teams simply haven’t been able to match and not only that, it is a team of entertainers, too. As Brazilian playmaker Eninho said on Twitter at the weekend, “This is a Motors team without any brakes.”

Until Jeonbuk won the 2006 Asian Champions League, the Jeolla club was never really seen as a major contender in Korean soccer. It would win the occasional cup (which is how it qualified for the continental competition in the first place) but it wasn’t one of the big boys that vied for the league title. That started to change and in 2009 Jeonbuk lifted the golden K-League trophy for the first time. It would not be a surprise at all if it repeated that in 2011.

Just like the famous bibimbap dish that hails from the city, Jeonbuk has all the right ingredients to give fans and players a taste of success. There is a solid foundation in defense, a lively and creative midfield, a strike force that can actually score goals, with some Brazilian flair adding a little extra spice to what is already a tasty dish.

Jeonbuk is at the top of the standings with Lee Dong-gook getting most of the headlines. The Lion King’s time as an international is over but the striker is still hungry for success and has managed 10 goals already this season.

Despite topping the scoring charts along with Sangju’s Kim Jung-woo, Lee is not yet ready to start thinking about winning the Golden Boot just yet.

“We have to see after the season is over. I personally want to finish the season without injury,” he said. “This year, I feel comfortable playing because my teammates are scoring easily. The team is getting stronger because many players are scoring goals.” 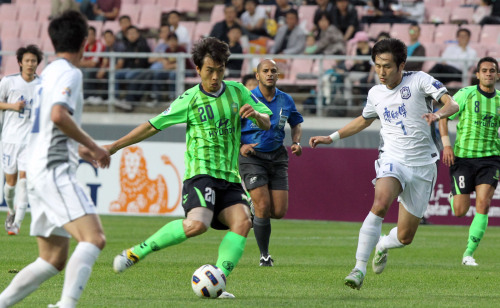 Jeonbuk Motors striker Lee Dong-gook (Yonhap News)
The former Middlesbrough marksman is right. Jeonbuk has scored an impressive 33 goals already this season in just 14 games. Gwangju was thrashed 6-1 and Incheon swatted aside 6-2. Just last weekend, the Motors came back from 1-0 and 2-1 down at home to Jeju United to win 3-2.

Jeonbuk was also the top scorer in the group stage of the Asian Champions League and has been perhaps the most impressive team in the continental competition so far. The team has reached the last eight and could repeat its success of 2006 when it was crowned champion of Asia. The quarterfinal against Cerezo Osaka is not until September, leaving enough time to increase its lead at the top of the K-League.

Lee may have been grabbing the headlines but it has been a real team effort. Lee pointed to the leadership of Kim Sang-sik in defense. The veteran pulls the strings. Former Korean coach Pim Verbeek often said that Kim was the best player in the country when he had the ball at his feet, so comfortable he was in possession.

The Brazilians in the team, Luiz Henrique, and especially Eninho, have been around for a number of years. Eninho can be inconsistent but often reserves his best performances for the big games. The likes of Kim Dong-chan and Lee Sung-hyun may not grab the headlines but are quietly efficient with Lee being called up to the national team recently. The team’s Chinese midfielder Huang Bowen is also finding his feet in the K-League.

And in long-serving coach Choi Kang-hee, the club has a man who doesn’t say much but has seen it all in Korean and Asian soccer.

“We are playing well at the moment but there is still a long way to go this season,” said Choi. “The challenge for us is to be doing the same at the end of the year and be challenging in both Korea and Asia.”