[ The Korea Herald – Send E-mail ]
OECD chief sees no double dip
By 김소현
Published : Jun 20, 2011 - 18:53
Updated : Jun 20, 2011 - 18:53
The world economy is seeing some signs of a slowdown due to the eurozone’s debt problems and a weak U.S. housing sector, but is not headed for a double-dip slump, Angel Gurria, secretary general of the Organization for Economic Cooperation and Development, said Monday.

“No, that is not the case,” Gurria said when asked if recent signs of a slowdown pointed to the global economy facing another downturn. 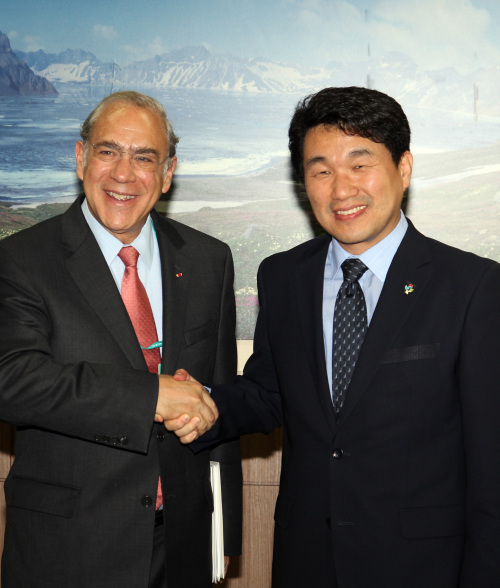 Angel Gurria, secretary-general of the OECD
He cited political turmoil in the Middle East, debt problems in eurozone economies, higher commodities prices, the natural disaster in Japan and problems with the U.S. budgetary negotiations as some of the factors behind the slowdown.

“There is recovery. There are positive numbers (although) it is going to be a little softer than we thought initially,” Gurria said on the sidelines of the Global Green Growth Summit jointly hosted by the OECD and the Korean government in Seoul.

About the debt problems in Greece, Ireland and Portugal, Gurria noted that the governments of these countries already know the solutions but they are having trouble getting them supported by their parliaments.

“They have already taken too long. The solutions are on the table, experts are talking to the politicians who now have enough elements..

“The Greek situation is being discussed now from two angles ― new money from Europeans or the IMF, and participation of private sector, prolongation of maturities to give time to economic policymakers of Greece.”

As for green growth, Gurria emphasized the need to get the private sector to play a greater role.

“We know we want a low-carbon world, to reduce emissions and that green growth is a desirable path to growth, but the question is how can we increase the part of the total energy supply that’s provided by renewable energy,” he said.

“The simple answer is make renewable energy a good business and there will be plenty of investment.”

Gurria also noted that nuclear energy continues to be part of the solution.