“I bought the original Wii because it was popular, new and seemed like a great item to have at a party,” said Kawatsu, who owned the game console for four years before selling it three months ago. “This time, there is nothing surprising or fresh.”

Kawatsu, who now prefers to play games on his Apple Inc. iPhone, illustrates why analysts say the WiiU will probably fail to replicate the original Wii’s success. Nintendo, facing mounting competition from mobile games such as “Angry Birds” and “Farmville” on Facebook, has tumbled 13 percent to a five- year low in Osaka trading since it unveiled the new console at the Electronic Entertainment Expo in Los Angeles this month. 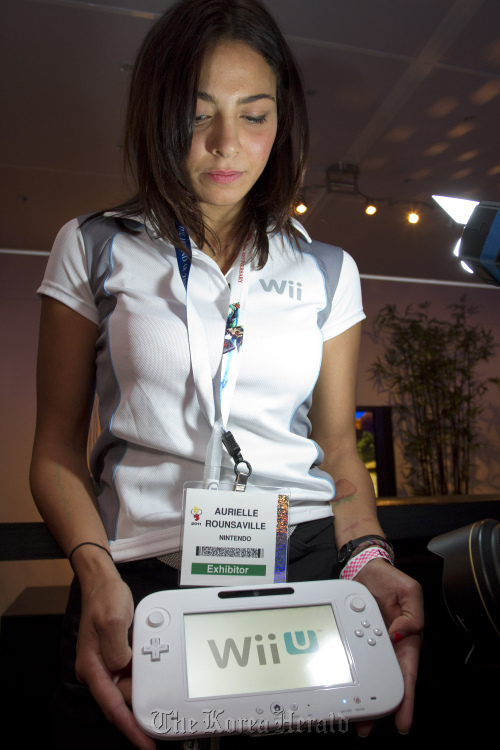 A WiiU video-game handheld console at the Electronic Entertainment Expo in Los Angeles, California. (Bloomberg)
“They’ve been losing their core customer,” said Michael Pachter, an analyst at Wedbush Morgan Securities in Los Angeles, about Nintendo. “The 45-year-old housewife who bought Wii Fit is playing Farmville, and those in the handheld casual market are playing on the iPad and smartphones.”

The world’s largest maker of video-game players this month said the WiiU will go on sale next year, though it didn’t disclose the price. Sales may peak at about 30 million units, less than half of the original Wii, Pachter said.

President Satoru Iwata demonstrated the WiiU on June 7 at the E3 show in Los Angeles. The presentation focused on the console’s controller, the centerpiece of Nintendo’s device, according to executives at the Kyoto-based company.

“The excitement generated by the console may be difficult to understand for those who weren’t lined up at our booth at the E3 show,” said Yasuhiro Minagawa, a spokesman at Kyoto-based Nintendo. Minagawa declined to comment on the sales outlook for the new player.

The WiiU controller has a front-facing camera, a 6.2-inch touch screen, shoulder firing pads, an expansion slot and game controls on a flat pad. With it, users are able to wirelessly connect to the console and shift content back and forth from a large screen in the living room to the smaller screen.

In February, Nintendo began selling in Japan its 3DS handheld player that beams images in three dimensions without the need for special viewing glasses. Sony Corp. plans to begin sales of its PlayStation Vita portable player this year.

Nintendo is also facing new rivals who are beginning to redefine the market.

Among them is Cupertino, California-based Apple, which says it’s sold more than 200 million devices capable of downloading and playing games, including 25 million iPads. The App Store, an Apple-run software marketplace, offers a choice of more than 100,000 game and entertainment applications to users of the iPad, iPhone and iPod Touch.

Sony, whose PlayStation machine dominated the previous generation of game consoles, shipped 8 million of its motion- sensing Move devices, it said in April. The black controller with a colored ball in front requires a separate camera to detect player movement.

Sony, the world’s second-largest maker of portable game players, this month unveiled the PlayStation Vita and said it will sell for $250, same as Nintendo’s 3DS. The Vita will feature a five-inch display using organic light emitting diode, or OLED, technology, a rear touch pad and play titles including “Uncharted: Golden Abyss” and “LittleBigPlanet.”

Investors are taking note of the competition.

“It’s beginning to look like Nintendo is falling behind the times,” said Tomoaki Kawasaki, an analyst at Cosmo Securities Co. with a “neutral” rating on Nintendo. “The company is probably overdue for a business model change.”

Most analysts aren’t as pessimistic. Half of the 24 brokers tracked by Bloomberg rate Nintendo a “buy.” Eleven rate the stock “hold” and Citigroup Inc. is the lone “sell,” according to data compiled by Bloomberg.

“The new concept covers areas where the Wii was lacking, such as images in high definition, so it should expand the potential user base,” said Yuuta Sakurai, a Tokyo-based analyst at Nomura Securities Co. who’s rated Nintendo “buy” since March 2000. “Wii U has potential” to repeat its predecessor’s success.“

In April, Nintendo forecast net income will rise 42 percent to 110 billion yen ($1.4 billion) in the year to March 2012, missing analysts’ estimates for 143.8 billion yen at the time. The projection doesn’t include sales of the new Wii, the company said then. A gain would be the first in three years.

Still, a revival in earnings won’t help Nintendo lure back Kawatsu, who now uses an iPhone to play Mahjong during train rides. The new Wii isn’t appealing to him.