LONDON ― Majoring in Korean might sound a little intimidating to most Europeans, but Kevin Fry, a senior at the School of Oriental and African Studies, University of London, was up to the challenge.

“I tried to learn Chinese, but didn’t find it particularly enjoyable. So I started to learn Korean, and initially got interested in it,” he said.

Kevin noted that the student exchange program of SOAS, in particular, helped broaden his interest in Korean Studies.

“I stayed one year in Korea. I really enjoyed the time, and the more I studied, the more I got interested in Korea,” he said.

Located in central London, just a few meters from the British Museum, SOAS is the only higher education institute in the U.K. specializing in the study of Asia, Africa and Middle East studies. 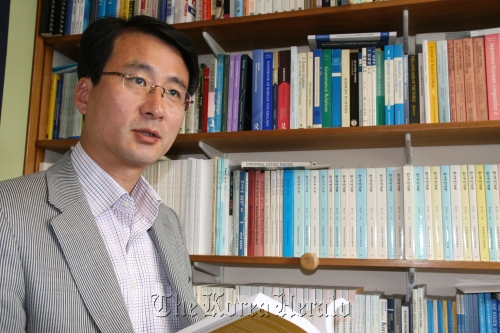 Yeon Jae-hoon, professor in Korean studies at SOAS
“Korean language is currently taught in 25 different European countries. But SOAS has by far the largest number of students and professors in Europe,” claimed Yeon.

There are around 25-30 students in each year group, and currently seven professors teach them.

“This number will continue to rise. Each year more and more students come to study Korean, so we’re hiring one more professor this year,” he said.

SOAS has intensive language training. Students in their first year must take a minimum 10 hours of Korean language a week, explained Yeon.

In their second year, they must spend one year at Korea University in Seoul as part of a student exchange program between the two universities.

“The student exchange program is one of the main strengths of our university,” said Dr. Grace Koh, a lecturer in Korean literature at SOAS. 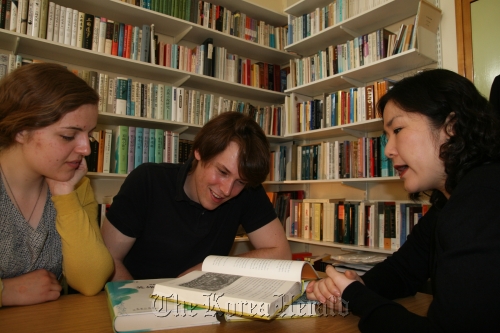 Grace Koh (right), a lecturer in Korean literature at SOAS, holds a tutorial with her students. (Oh Kyu-wook/The Korea Herald)
“Students take my course once after they spend a year in Korea. And it’s really helpful when students come in with a certain level of knowledge of Korean culture,” she said.

Sophie Bowman, an MA student at SOAS, picked the library as another strong point of SOAS.

“I think the library here is better than anywhere else, they have four or five stacks of books in Korean,” she said.

“SOAS is the only university in the U.K. which has an online database of Korean books and newspapers,” she added.

In April 2010, the center also held a workshop of the European Association for Korean language education. Fifty-eight Korean language lecturers from 17 different countries participated in the annual workshop, looking at ways to cooperate to develop curriculum materials and teaching resources.

“Most of all, SOAS is in London, an international city. Near the university there are four Korean restaurants and lots of Korean supermarkets. It’s quite a unique environment,” Sophie said.

“The atmosphere here is really great because there are a lot of different people from different backgrounds. For instance, I study Korean and my friend studies Persian, and we can talk about two different cultures, share similarity and differences,” she added.

“This year we have received one of the highest numbers of applications. And surprisingly K-pop has been mentioned in almost all the applications I’ve seen,” said Koh.

Still, Yeon admitted that Korean Studies lag behind Chinese and Japanese studies in terms of numbers of students.

“The size of Korean Studies is now about the size of Japanese Studies in the ‘80s,” he said.

However, Yeon added that he believes Korean Studies at SOAS will grow rapidly and soon catch up with other popular studies.

“I hope and believe that in less than ten years Korean Studies will become as popular as Japanese Studies,” he added.