“I talked to mostly Korean sommeliers and restaurant managers,” the 46-year-old told The Korea Herald.

A pattern emerged. It looked like 80 to 90 percent of the market was cornered by French wines.

Melka knew what he had to do. He and the team at Napa Valley winery, Dana Estates, would “bring a Bordeaux spirit” to the Californian grapes. 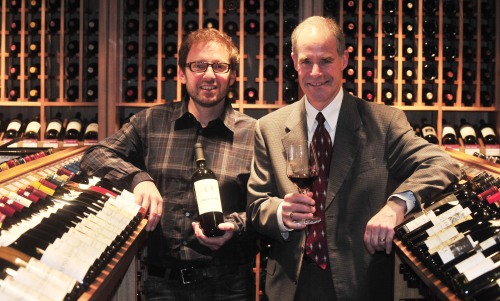 Within several years, both wines would be served at the G-20 Seoul Summit in 2010.

Lee clearly knew what he was doing.

He knew what he was doing when he decided to transition from importing wines into Korea to making them.

There he was, a visionary with a passion for wine, sitting on three vineyards (soon to become four), and while his three wines, named after the vineyards from which they were produced, were spectacular, he had all these other stellar grapes that did not quite fit in, but that would be a shame to waste.

“We had these other blocks that were really, really good,” said Perry. “Chairman Lee felt we had an opportunity to make a wine that might fit well with the Korean palate.”

There began a challenging enterprise that entailed research on the part of everyone, including Melka, to not only grasp Korean wine preferences but to also concoct wine from a blend of berries that harmonized and melded seamlessly into each other.

Achieving a feat like that would require a lot of work, and it would entail harvesting the grapes when they were all at the same level of ripeness.

In other words, it would be like juggling four balls simultaneously.

Suffice it to say, Perry, Melka and team have pulled it off, which is why they are here in Seoul to promote the fruits of their labor.

On Thursday, on the last leg of a trip that began Monday, Melka and Perry sit down at Lotte Hotel Seoul to taste their 2007 Onda d’Oro.

Melka swirls his glass and takes a sip before explaining he feels that Korean food possesses an element of freshness, purity and focus that runs parallel to their wines.

Perry, who dined with Melka at the hotel’s Korean restaurant the previous night, gushes about the braised duck with black garlic and seasoned mountain herbs that he ate, about how it went perfectly with their lower-end Vaso.

Eager to share his take on pairing hansik with full-bodied reds, he says, “We think full-bodied red wine should be served cooler. It keeps the wine in focus.”

“And the purity as well,” added Melka. “As the wine gets warmer, closer to room temperature, it accentuates the heat both in the food and the wine.”

An undesirable situation, when trying to match the piquant spices often found in Korean cuisine with a potentially independent-minded red.

While it is important to be able to pair wines designed for the Korean market with Korean food, it is also crucial to create wines that can fly solo too.

Deep, pungent and bracing, it reflects the terrain of its maker, the jammy aplomb of a Napa wine and the smoky, mouth-puckering mystery of an Old World vintage.

A huge chunk of the wine, about 50 percent, comes from Dana Estates’ Crystal Vineyard (once a part of Lotus), but another sizeable chunk comes from Helms Vineyard, which is where the fascinating tale of a Korean businessman intent on setting down roots in Napa begins.

Before Lee purchased the first of the three vineyards, Helms, as told by C Magazine, was once Livingston Moffett property. Helms is what experts call a “ghost winery,” in that it was built in 1886, before the Prohibition, by a German viticulturist of the same name.

Here stood a prime piece of property that was just waiting to perform to its fullest potential, and a stroke of luck brought Melka ― a winemaker so famous that according to the San Francisco Chronicle his services were enlisted for one million dollars (in a bid that was donated to charity) ― to Helms’ ancient collection of wine.

He tasted with Cameron Vawter (the current director of production of Dana Estates), just weeks before the entire collection would go up in flames, lost to the world.

What he experienced was promising.

“When we tested the wine, we felt like we could really create something special,” he recalled.

Intrigued by Rutherford, by its long history of famous wines like Inglenook, by the fact that he had yet to get down on his knees and work with the soil there, feel its dirt under his nails, Melka joined the project.

Determined to really nail the characteristics, the flavors, aromas and profiles of each vineyard ― Helms, Hershey and Lotus (later to be divided to include Crystal) ― he helped track down a French perfume expert, someone with an able-bodied nose that would be able to discern everything.

“Good winemakers find, I would say about 100 different kinds of flavors or aromas in a wine,” explaining that perfume experts can find about 1,000 kinds.
Once they grasped the personalities of each vineyard, then they set about making wines that would express the true terroir of each site ― one produced solely from Helms, one from Hershey and one from Lotus.

That would mean taking a holistic approach.

They created three separate fermentation caves ― one for very ripe fruit, one that would bring structure and harmony and one for highly tannic grapes. Grapes would be farmed organically and hand-harvested.

Why go to all the effort?

Melka explained that when producing “extremely high-end, sophisticated wines” like theirs, “the impact of the human on the winemaking process needs to be kept to a minimum.”

Being incredibly hands-on doesn’t mean Dana Estates is a strict devotee of old school winemaking. In fact, Dana Estates and DongA One Corporation ― a subsidiary of Lee’s Woonsan Group ― are teaming up to create a “smart” winery system that will implement top tier technology.

“This is a work very much in the early stages,” said Perry. “But the idea is to develop a system that manages everything from farming to fermenting to bottling.”