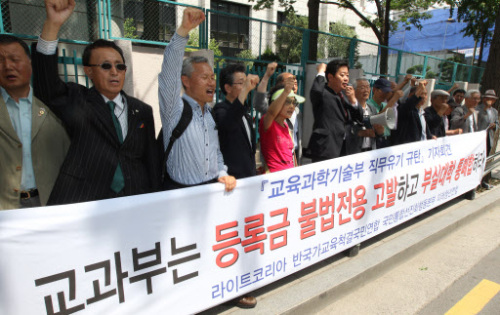 
The government has decided to restructure underperforming universities as it struggles to come up with measures to curb skyrocketing college tuition fees.

According to the Ministry of Education, Science and Technology on Thursday, the government will reduce enrollment at four or five public universities while cutting financial support for less competitive private schools.

“The ministry will increase the number of private schools subject to credit restriction from 23 to 50 next year. In line with the plan, we are to take a similar measure against public schools,” Education Minister Lee Ju-ho said Thursday during a meeting with the presidents of 31 public universities.

“Of the total 31 public universities, those ranking in the bottom 15 percent in an evaluation will face a major restructuring, including a reduction in student enrollment,” he said.

The government last year began announcing a list of less competitive universities to impose credit restrictions despite the schools claim that such revelations could brand their school members.

Currently, 23 universities have been designated as “underperforming” based on their credit ratings and their graduates’ rate of employment. No public school, though, has been blacklisted so far.

Students of the underperforming schools are to have some restrictions in taking out student loans through the income-contingent loan program, which the government introduced last year.

“Regarding the recent disputes over college tuition, there is a social demand for school restructuring and public schools should also respond to it. The government will carry out the plan with consistent intent,” Lee said.

Earlier on Thursday, the Education Ministry also agreed with the Ministry of Knowledge Economy to exclude less competitive private schools from their 1.6 trillion won ($1.5 billion) financing project for universities.

Thirteen of the underperforming schools are currently being restructured.

If the government pushes ahead with the reform plans, another 55 universities will face a major restructuring as early as next year.

As private schools account for almost 90 percent of all universities in Korea, reform programs have so far been focused on private universities that impose higher tuition fees.

However, the government’s new plans reflect its recent view that public schools cannot avoid the demands for change.

“Thanks to the restructuring efforts at private schools, public schools are now considered less competitive compared to private schools in recent decades. Pressure would be helpful for schools to improve management,” the minister said.

The government and some lawmakers have also submitted a set of bills to the National Assembly that allows the government to dissolve school boards for reckless management.

As for the controversial “half-tuition policy,” the minister said: “It’s difficult to say specifically now, but we are seriously considering pouring in more money (to allow the universities cut tuitions).”

“We also need to improve scholarship programs to offer more scholarships to low-income students as well as high-performing students.”

Meanwhile, some universities unveiled Friday their new scholarship programs for low-income students following the announcement of Seoul National University on Thursday that it will waive tuition for students from low-income families in the bottom 50 percent income bracket.

Yonsei University said it was developing a new scholarship program that imposes different tuition fees after reviewing factors such as family income and the number of children in a family who attend college or university.

The school said it will announce a new plan early next month that will benefit more students in different ways.

Hongik University also decided to halve the tuition fees for some 2,220 low-income students from the fall semester, earmarking a budget of 5 billion won.

Seoul National University had unveiled a plan Thursday that it will offer a full scholarship to low-income students from the next semester. Of the 16,325 undergraduate students at the school, some 1,700 to 2,000 are expected to benefit from the measure, the school said.