There are many deadly diseases in the world but few provoke the same anxiety as cancer.

Cancer is the No.1 cause of death apart from aging. As of 2008, about 178,000 people were being diagnosed with cancer every year, with about 60,000 dying of it. Those numbers are expected to soar, according to the National Cancer Center.

“It is quite natural for the number of patients to increase as cancer is deeply related to aging,” Dr. Christopher Wild, director of International Agency for Research on Cancer said Wednesday.

Wild told The Korea Herald, however, that there are other risk factors.

“Tobacco is the probably the single largest contributor to various cancers and has so far showed the strongest evidence to prevalence,” he said.

Exposure to pollutants, chronic infections such as hepatitis B causing liver cancer and human papilloma virus leading to cervical cancer have also been verified as risk factors in the past few decades.

His institute has been researching the possible cause-and-effect of obesity on cancer, too.

“In some countries, eating fatty and sugary foods causing cancer has been long talked of. We will see the relations between being overweight and the prevalence of cancer in the near future,” he said. 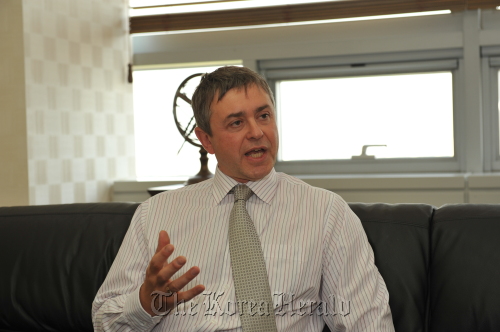 Christopher Wild, director of International Agency for Research on Cancer, speaks at the National Cancer Center in Ilsan, Gyeonggi Province, Wednesday. (The National Cancer Center)
The IARC, an affiliate of the World Health Organization, recently announced that radiofrequency electromagnetic fields from mobile phones could affect the prevalence of brain cancer in young people. The Korean Health Ministry advised teens and children to refrain from using phones or to use them with non-contact devices such as hands-free headsets or earpieces.

“After looking over hundreds of papers and details worldwide, we have drawn a conclusion that it is better to limit its use as it is suspected to be related to cancer prevalence,” Wild said.

As much as cancer is feared, there are mounting myths about the prevention and treatment of the disease, too. From diets to mysterious remedies, people are easily lured by unverified methods that claim to prevent the disease.

“I take it as a positive sign that more people are putting their attention on making themselves healthier,” said Wild.

But Wild doubted whether nutritional supplements such as vitamins could really help prevent cancer. Acknowledging that he had not much information about Oriental medicine, he said Oriental medicine and acupuncture do not seem to be as effective as they claim to be, he said.

“I think by far, what has been proven to be effective is the very basic principle. Take regular physical activities and avoid being obese. Limit red meat consumption and eat more vegetables,” he said. “When we talk about treatment effect, it must be evidence-based research,” he added.

Asked what the most important thing in dealing with cancer is, Wild stressed early screening.

“Currently, some governments provide complimentary cancer check ups. (The Korean national health insurance program also provides regular cancer screening tests to those over 40) If not, getting private checkups is necessary because the earlier one spots the cancer the possibility of survival goes up dramatically,” he said.

Wild said humans are reaching the level where cancer is fightable.

“Currently, causes of some cancers have been verified. Also, treatments have developed in the past few decades and about 95 percent of youth leukemia patients survive for more than five years,” Wild said.

The institute is currently working on following the change in tumor development at a molecular level. The research hopes to discover the origin of the cancer and therefore, in the long term, help find treatment.

“There is some notable research underway that will make great progress in cancer research in the future, too,” he said.