He was only 11 years old, but he was already fending, rather unsuccessfully, for himself.

Separated from his North Korean mother and abandoned by his Chinese father, the boy was living in a collapsing cottage without a roof or running water. Struggling to survive on scraps and garbage from the nearby village, he soon contracted food poisoning from eating the spoiled food.

The boy would not have survived if charity workers had not found him and nursed him back to health.

Though an extreme case, the plight of this “orphan” is all too familiar to aid agencies working in northeastern China, near the border with North Korea.

Helping Hands Korea is one charity working to rescue these children, whose mothers fled North Korea only to find that their new lives are also fraught with danger. 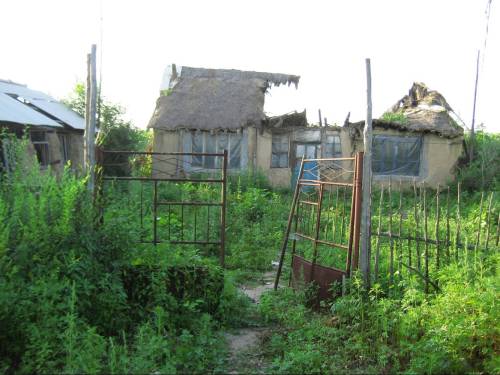 The collapsing cottage that was home to an 11-year-old boy in China after his mother was deported to North Korea. (HHK)
The charity’s founder and managing director Tim Peters explained the situation at a recent talk in Seoul, telling how this “second wave” of orphans is different to those that first needed outside help following the exodus of families fleeing the North Korean famine of the 1990s.

“Those in the first wave were children who had lost one or both parents to the famine, medical problems or family breakup. Now we are faced with an almost overwhelming flood of second wave orphans,” Peters said at a British Chamber of Commerce in Korea luncheon in Seoul last Thursday.

His Christian Seoul-based charity aims to help this second wave of orphans, which is vulnerable because of the terrible situation their mothers find themselves in upon reaching China from North Korea.

“I am sad to say that around 80 percent of North Korean women leaving their county fall prey to human traffickers in China,” Peters explained.

“They come out of the Tumen river still dripping wet. As they step onto the other side they are shocked to realize money is changing hands and they are sold, not hired to work as a housemaid as they expected. They have been in effect sold as a wife or concubine or something like that.

“I am sad to say that this type of thing occurs many thousands of times simply because there is no control of it. They are completely defenseless against those who are trying to manipulate them.

“There is no recourse to the criminal justice system in China for these women. They are completely pawns in the hands of those who want to make use of them. Even people in their own society will deceive them and sell them before they leave North Korea.”

Peters showed footage of interviews with North Korean women who said they had been sold for between $720 and $1,000 in areas of China such as Yanji.

One woman said she had been sold to a mute husband who beat her with sticks.

“He couldn’t hear my screams,” she said. “He hit me until he had broken four clubs.”

Another woman said: “I wouldn’t have come here if I had known I would be sold. I tried to run away but because of my baby I came back after 33 days.”

Peters said the demand for North Korean wives from men in rural China was high because the country’s one child policy and a tendency for young Chinese women to migrate to the cities meant that the ratio in some areas could be one woman to every 14 men.

“The men left behind are eking out a living with fewer and fewer potential Chinese spouses. The birth father may have some kind of mental or physical handicap which makes him rather unattractive as a marriage partner, so he may try to get a North Korean wife,” Peters added. “Unfortunately the tragedy in North Korea continues to supply for the need in China.”

Women deported by Chinese police back to North Korea are forced to leave behind children they took with them from their home country or had with Chinese husbands. Some women also abandon their children when attempting escape to South Korea, fleeing their forced marriages and the threat of being sent to North Korean prison camps if caught in China.

Peters was nominated for a Nobel peace prize by the Wall Street Journal in 2007 for such work, and has been called upon three times to provide testimony to the U.S. Congress on North Korea’s humanitarian crisis and how his NGO deals with both refugees and food aid to the North.

“In any case there are more children than the NGOs in this area can help at the moment,” Peters said, calling for more people in South Korea to raise awareness and donate to the cause.

“The 11-year-old boy was found living in the abandoned collapsing cottage after his mother was repatriated and his Chinese father took no further interest in him,” Peters recalled.

“His mother was dragged away and his father simply thought that he had lost a $700 investment and what was this child to me I lost my money. He abdicated any thought of parental investment.”

The child, who has not been identified for his own safety, is now being cared for along with five other kids in one of Helping Hands Korea’s four unofficial foster homes in China.

Charity Christian Solidarity estimates that there could be as many as 100,000 “orphans” needing similar care in the country.

Anyone wishing to learn more or to donate to HHK’s work to help these children can go to www.helpinghandskorea.org.