Lawmakers, government officials, university presidents, professors and students gathered on Wednesday for a forum on tuition cuts hosted by the Grand National Party but failed to reach any agreement.

“We are running against the clock as the Education Ministry is to submit its budget bill to the Finance Ministry by the end of the month,” the ruling party’s floor leader and acting chairman Hwang Woo-yea said in his opening speech.

“The in-depth discussions which we will share in today’s forum and over the coming weeks shall affect the future of our country.”

Student council presidents urged the party to carry out its pledge to slash tuition fees by half, whereas school officials argued that the level of governmental support or private donations must be raised first. 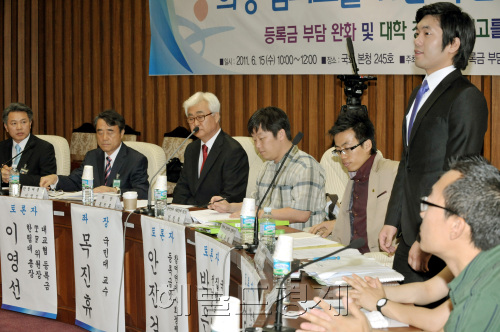 Kim Soo-rim, leader of the student council at Duksung Women’s University, said that it was more urgent to eradicate corruption in private schools. Tuition fees would inevitably rise again in the coming years otherwise, Kim said.

School administration officials stressed that government a contribution was vital to alleviating the financial burden shouldered by students and parents.

“The level of state support in public education is low in Korea,” said an official of the Korean Council for College Education.

“The administration should invest more in job training programs in a bid to reduce the excessively large number of college and university students and graduates.”

Lee Young-sun, president of Hallym University who also sits on the Korean Council for University Education, warned that schools must not damage their competitiveness with an attempt to lower tuition fees.

Media experts, on the other hand, accused the ruling party of treating the tuition debate politically.

“I doubt that Rep. Hwang Woo-yea is willing to make donations to universities by cutting his own expenses and selling his properties,” said an editorial writer of Dong-A Ilbo.

“It is easy for lawmakers to propose projects which will require a tax raise, for they consume not their money alone but numerous taxpayers’.”

Some lawmakers of the ruling party voiced concern about the party’s haste.

“In the past, lawmakers would thoroughly review their bills to make sure that the contents are socially and financially reasonable,” said Rep. Chung Ui-hwa, emergency policy committee chairman in a senior lawmakers’ meeting.

“I fear that many of our members have recently strived to mimic the opposition camp’s policies without a deeper consideration on the issue.”

The main opposition Democratic Party, which has pledged a more generous tuition cut, also held a general meeting on Wednesday to discuss the issue but failed to reach a consensus.