Attention is being paid to the parliamentary passage of the controversial advertising broker bill as the National Assembly committee dealing with the issue is due to open its general meeting later this month.

The opposition Democratic Party said Monday it decided to go with having a single advertising broker for public television stations and a separate one for private TV stations after holding a workshop on the issue last weekend.

It also said KBS and MBC will be labeled public TV stations and that SBS and the new general news programming and news-only broadcast channels will be included in the private TV station category.

“The bill on media representative must be passed during the temporary parliamentary session this month since the new general news programming channels are looking forward to launching in the latter half of this year, which means they will soon be making moves in the advertising market,” said Rep. Kim Jae-yun of the DP. 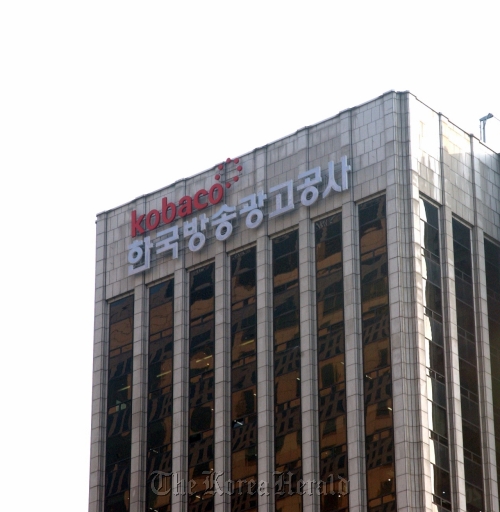 The headquarters of the Korea Broadcast Adver­tising Corp. in downtown Seoul. (Kobaco)
Jeon Jae-hee, a Grand National Party lawmaker and head of the culture, broadcasting and communications committee at the National Assembly, also said she will gear up for the passage of the media rep bill by June.

In Korea, the Korea Broadcast Advertising Corp. has played the role of a media sales house and monopolized the process of selling and distributing advertisements to TV stations since the 1980s.

But many opponents criticized the monopoly of Kobaco, stating that a free competition system should be in place for the broadcasters since the mid 1990s.

Related to that matter, the Constitutional Court ruled in November 2008 that Kobaco’s monopoly on TV ads was unconstitutional. Since then, up to six different bills on the media rep issue has been sleeping in parliament for over two years.

The most controversial issues are the to-be-authorized number of media reps and the broadcasters’ maximum percentage of stock ownership of their media reps.

Another issue at stake is whether to label MBC a public or private broadcast station.

While the main opposition party has collected their members’ opinions on the most-debated factors, the GNP still has not found complete common ground.

What is so time-pressing about the matter right now is that the smaller players ― regional and religious TV channels ― are bound to be impacted by their decreasing share of the TV ad market following more competition and no protection measures, according to Hong Sung-kyu, the vice chairman of the Korea Communication Commission.

Claiming that 70-80 percent of the TV ads are linked to one another, it will seriously affect religious stations like CBS and BBS, as well as smaller TV stations placed out of Seoul, such as regional MBC, he said.

“The new general news programming channels are making preparations to begin operations as early as December this year,” said Hong. “That means they would have to start making marketing and advertising efforts in September, which is three months in prior to their launch.”

He added that the three major terrestrial broadcasters and the new TV stations will continue on with their own way of ad recruiting efforts but that the smaller players will most likely face hardships.

“Both political parties have formed a consensus on offering support for small and mid-sized broadcasters. They need to be supported to a certain extent to not lose their regional identity, categorical differences and specialty,” said Jeon.

“It is now a task for the National Assembly to figure out how to melt the details of both parties into a bill which could be passed this month.”