PARIS ― This is a fast-paced city where new trends come and go in the blink of an eye. The fashion capital of the world is also a city that welcomes new ideas and artists from across the globe.

And, now it seems that the Korean Wave, or hallyu, has captivated the French capital: On June 10, Paris welcomed its first full Korean pop concert at Le Zenith de Paris concert hall.

Five Korean pop acts, including TVXQ, Girls’ Generation, Super Junior, SHINee and f(x) performed, and more than 7,000 fans flocked to the concert, singing and dancing along during the three-hour performance.

French media, such as Le Monde and Le Figaro, described it as a “new sensation.” However, Choe Jun-ho, director of Korean Cultural Center in Paris, says that the K-pop phenomenon has been slowly spreading here over the past few years.

“It’s been almost three years since they first met here,” Choe told The Korea Herald at his office in the center in late May. 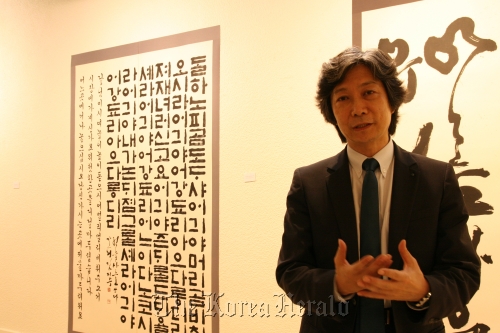 Director of KCC in Paris Choe Jun-ho (Oh Kyu-wook/The Korea Herald)
Choe was speaking of the Korean Connection, a French hallyu fan club formed by students in Korean classes at the culture center.

“Two years ago some of our students who follow Korean pop music set up an online fan club, and it has become a huge hit ever since,” said Choe.

The Korean Connection, which now boasts more than 3,000 members, organizes activities both on and offline. Recently, the French fan club played a key role in bringing adding an extra Paris concert to SM Entertainment’s tour.

Only one date in Paris was initially scheduled, but tickets sold out within 10 minutes, prompting thousands of fans who missed out to sign a petition requesting an additional concert. Then, some 300 members of the fan club staged a special demonstration at the Louvre Museum, finally compelling the organizer to add an additional concert,

One member of the Korean Connection predicted that the number of K-pop fans in France would top 100,000 soon, considering the impressive ticket sales.

Furthermore, Choe claims that the Korean wave is not only limited to young people, but also to people of different generations in Paris.

He also noted that Korean food is an example of the increased interest in Korean culture here. In October 2010, the Korean Culture Center held a promotional event for bibimbap, and more than 1,000 people showed up to try Korean food. 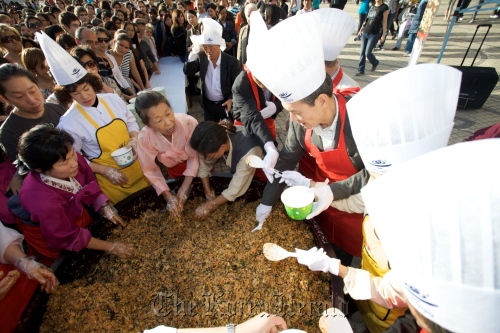 A bibimbap event in Paris in October 2010. (KCC)
“There are now around 100 Korean restaurants in Paris. This shows how popular Korean food is here,” he said.

The Korean Cultural Center, which opened its doors in 1980, is located in the heart of the city, just few meters from the Eiffel Tower. The director said that the center has seen rapid growth in the number of visitors in recent years thanks to its programs.

Since 2008, the Korean Culture Center has been offering a series of lectures on Korea every Wednesday between March and May. High-profile experts have been invited to give lectures, covering a wide range of subjects from Korean society, religion, arts, film and music.

“It has been another successful year. More than 100 people came in one day, and we even had to open the lecture room door, and put chairs outside,” he said.

The number of visitors is important, but more crucial is getting more locals involved in the culture, Choe said.

“Culture centers run programs that are often just one-off things, inviting limited number of government and diplomatic officials. But we’re striving to be different.” he said.

He noted that his main role is building a connection between Korean artists and local experts.

“My role is to be a stepping stone for Korean artists to get into major galleries and exhibition venues here,” he explained.

For instance, last week, he helped organize a Korean video-art exhibition at the Pompidou Center in Paris.

“It is important because if we can help more Korean artists to exhibit their work at major venues, more locals can come and see it.”

Choe spoke from experience. The former art director of Seoul Arts Center oversaw exchange projects between the two countries for more than 15 years before being appointed to his post in late 2007. He also studied in France between 1984 and 1993.

Paris is the world capital of culture and heritage, with 46 countries operating culture centers. Hence, building a good reputation here is crucial.

He said one of the imminent tasks of the Korean Culture Center was to find a new location.

“The building is quite old, and there is not enough space, not nearly enough,” he said, noting that support is needed from the Korean government.

“I believe the Korean culture boom will not fade away anytime soon, but in order to maintain its pace, we need more support.”