[ The Korea Herald – Send E-mail ]
Syria’s army seizes back restive town
By 박한나
Published : Jun 13, 2011 - 18:03
Updated : Jun 13, 2011 - 18:36
BEIRUT (AP) ― Elite Syrian troops backed by helicopters and tanks regained control Sunday of a town where police and soldiers joined forces with the protesters they were ordered to shoot ― a decisive assault from a government prepared for an all-out battle to keep power.

Troops led by the president’s brother shelled Jisr al-Shughour as the gunships hovered overhead, paving the way for scores of tanks and armored personnel carriers to roll in from two directions. By early afternoon, the sounds of battle faded. The army was in control.

Sunday’s developments, and actions by opponents of the Syrian government, marked a major departure from what had been a largely peaceful protest movement. Among them: the discovery of a mass grave filled with uniformed bodies and the increasing willingness of mutineers and outgunned residents to fight back.

President Basher Assad’s response in Jisr al-Shughour, the first town to spin out of government control since the uprising began in mid-March, mirrored his father’s 1980 assault there. It was a clear message to anyone contemplating defiance.

Syrians who were among thousands to flee for the nearby Turkish border said about 60 mutineers were defending the town alongside some 200 unarmed residents. Their fate was unknown late Sunday, but the government reported three deaths in the fighting ― one of its own soldiers and two unidentified men whose bodies were shown to reporters.

“The Syrian army is fighting itself,” said Muhieddine Lathkani, a London-based Syrian writer and intellectual. “The army’s response was strong because they did not want the mutiny to become larger.”

Neighboring Turkey, about 20 kilometers away, has given sanctuary to more than 5,000 fleeing Syrians, nearly all of them in the past few days from Idlib province. Turkey’s prime minister has accused the Assad regime of “savagery.” 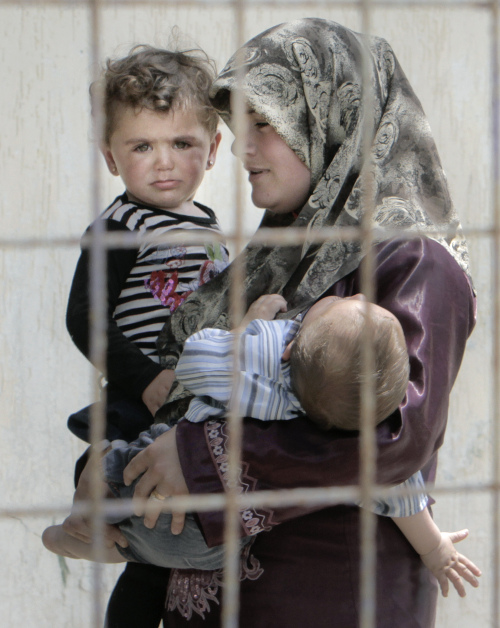 A Syrian refugee carries two children at a camp in Yayladagi, Turkey, near the Syrian border on Sunday. (AP-Yonhap News)
Arab governments, which were unusually supportive of NATO intervention in Libya, have been silent in the face of Syria’s crackdown, fearing that the alternative to Assad would be chaos. The country has an explosive sectarian mix and is seen as a regional powerhouse with influence on events in neighboring Israel, Lebanon, Iraq.

Fridays in Syria have become a familiar cycle of protest and government crackdown, one that appeared likely to continue on June 3 in Jisr al-Shughour and elsewhere. Instead, residents say, police and soldiers turned on their commanders, and control of the town slipped out of government hands.

Troops on Sunday removed 10 uniformed bodies from a mass grave in front of the Military Police building. At least four of the bodies were beheaded or struck on the head with an ax, according to an Associated Press reporter who was invited to accompany the Syrian forces. The building was burned and there were bloodstains in some rooms, which bolstered the reports of the mutiny.

Elite forces led by Assad’s younger brother, Maher, were ordered to the northern province of Idlib, a possible sign that the military no longer fully trusted its conscripts. The government, which has expelled foreign journalists and keeps tight control over information, unexpectedly invited a few reporters to join the unit, including one from The Associated Press.

“The situation is very bad,” said Abdu, a Syrian who sneaked into the Turkish village of Guvecci, where he came to get bread for his family who had fled and were camped just inside Syria. “We want democracy, we want freedom. We are not afraid of anything anymore.”

But he would not give his full name. Syrians who speak against the government face retribution and arrest, and few who express anti-government views allow themselves to be identified.

In Washington, U.S. Sen. Lindsey Graham raised the possibility of an international force like the one in Libya.

“But it’s going to take regional and international cooperation to get there. But if you really care about the Syrian people, preventing them from being slaughtered, you need to put on the table all options, including a model like we have in Libya,” Graham, a Republican representing South Carolina, told CBS’ “Face the Nation.”

Speaking in Colombia, U.N. Secretary-General Ban Ki-Moon said he has talked with President Assad several times and urged him to take “decisive actions to listen to the people and to take necessary measures to reflect the will of the people.”

“I’m deeply concerned and saddened that so many people have been killed in the course of peaceful demonstrations,” he told reporters late Saturday, adding that he urged Assad to let a humanitarian team into Syria to deliver assistance.

The government’s assault of Jisr al-Shughour was the most serious since the uprising against Assad’s regime began in mid-March. Assad has made some concessions, but thousands of people demonstrating against his rule ― inspired by protests in Tunisia, Egypt and elsewhere ― say they will not stop until he leaves power.

Syria’s government has said 500 members of the security forces have died, including 120 last week in Jisr al-Shughour. More than 1,400 Syrians have died and some 10,000 have been detained in the government crackdown since mid-March, activists say.

Backed by helicopter gunships and tanks, army units moved in after dismantling explosives planted on roads and bridges leading to Jisr al-Shughour, Syria’s state-run news agency SANA said, reporting “heavy” clashes.” Residents who fled to Turkey said thousands of young men and the mutinous forces had armed themselves and planted dynamite at the town entrances.

By late afternoon, two hours of sporadic explosions and cracks of gunfire had ended. The streets were empty. The roads were marked by burned tires and cement barriers erected by residents to slow the advance.

A resident who fled on Sunday said the army shelled Jisr al-Shughour, then tanks and other heavy armor rolled in from two directions. As the troops advanced, he said, they fought about 60 army defectors, whose fate was unknown. He said about 200 unarmed men who were guarding the town are believed to have been either killed or detained.

Syrian state television said one soldier died, and journalists taken to the National Hospital saw at two other bodies. Troops said they were gunmen, killed in the fighting.

Some Turks in the border village of Guvecci said Syrians on the other side of the frontier were calling them with reports that “smoke was rising from Jisr al-Shughour.”

Residents who emerged from their homes Sunday said they were suffering before the troops came. They spoke in the presence of military officers and government officials accompanying the journalists, and it was not clear whether they expressed their views freely.

“Gunmen were intimidating us. They told us ‘the army is coming to kill you and you have to flee the area,”’ said Zeina Salloum, 37, after coming out of her home to welcome the advancing troops.

Syria-based human rights activist Mustafa Osso said the advancing troops fought hundreds of army defectors from the area. “This is the biggest and most dangerous wave of defections” since an uprising against Assad’s regime began in mid-March, Osso said.

Lathkani, the London-based Syrian, said more troops could defect in rural areas after seeing that it took nearly a week for the army to bring reinforcements to Idlib.

The province has a history of hostility to the regime. Idlib’s Muslim Brotherhood population rose up against Assad’s father, the late president Hafez Assad, in the late 1970s. Jisr al-Shughour itself came under heavy government bombardment in 1980, with a reported 70 people killed. Residents say the numbers were much higher.

The events proved a prelude to a 1982 three-week bombing campaign against the city of Hama that crushed a Sunni uprising there, killing 10,000 to 25,000 people, according to Amnesty International estimates.