Jean-Claude Trichet also reiterated the bank’s opposition to letting Greece restructure its massive debts and was skeptical about a German proposal to get Greece’s creditors to voluntarily accept Greek bonds with longer maturities to give the country more time to fix its finances. 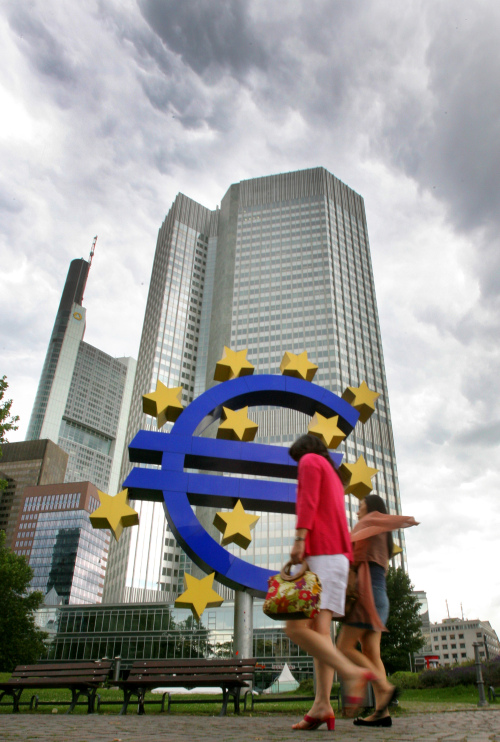 Pedestrians pass a euro sign sculpture outside the European Central Bank headquarters in Frankfurt, Germany, on Thursday. (Bloomberg)
Trichet, whose eight-year term expires at the end of October, was speaking after the bank’s governing council left its key rate unchanged Thursday at 1.25 percent for the second straight month. In April, the bank lifted its main rate from the all-time low of 1 percent, its first increase in nearly three years.

His post-decision statement that “strong vigilance is warranted” against inflation was seen as confirming market expectations for another increase to 1.5 percent in July.

Trichet said the bank had to make sure higher oil and commodity prices do not fuel a wage-price spiral at a time most of Europe’s economy is growing and inflation is running at an above-target 2.7 percent.

He also rejected suggestions that higher rates would make life harder for shell-shocked consumers in Greece and two other heavily indebted countries stuck in recession, Ireland and Portugal.

“When we solidly anchor inflation expectations in the euro area as a whole, we are anchoring stability and also anchoring confidence,” he said. “It’s good by definition for all countries.”

However, Trichet was hazy on when borrowing costs would rise again after next month and that prompted a reverse in the value of the euro, which has been buoyed of late by expectations of higher interest rates in Europe.

The currency dropped to $1.45, around a cent lower than where it was before Trichet’s conference.

As well as being quizzed on interest rate policy, Trichet was asked several time for his views on a German proposal for extending Greek bonds, which has been advanced by Finance Minister Wolfgang Schaeuble.

Trichet said the bank would continue to reject any change to Greece’s debt terms that is forced on bondholders and any step that would lead credit agencies to say the country had defaulted.

His repeated response ― “No credit event. No selective default.”

Asking bond investors to accept a swap could trigger a “credit event” in the view of ratings agencies, meaning Greece’s debt would be downgraded to imminent default or default levels. The exact ratings decision depends on the terms of the exchange but the agencies say if investors are left worse off or penalized for not taking part in a bond exchange then it should be considered a default.

Trichet would not be drawn on whether he thought the German proposal, which lacked key details, would effectively constitute a Greek default.

“We are not designing anything,” he said. “It’s the responsibility of governments.”

Trichet’s wariness about the German proposal underlines the policy divisions between the key players trying to keep Greece from defaulting: the EU, Germany, the International Monetary Fund and the ECB.

The ECB has taken a very dim view of most proposals to make Greece’s bondholders share some of the pain of righting the country’s finances, while EU officials have been floating ideas such as the bond swap or asking banks and other bondholders to voluntarily roll over bonds as they come due.

The discussions about Greece’s bonds are part of debate on a possible second aid package for the country that could come later this month. A (euro) 110 billion ($160 billion) emergency credit package last year has failed to put the government back on its feet financially.

The bank says that allowing Greece to restructure its debts could spread financial turmoil as banks face losses from the Greek bonds they hold. There are concerns a default could lead investors to withdraw from lending to other indebted countries for fear they would restructure too.

Economist Carsten Brzeski at ING said Trichet actually “back-pedaled a bit” in his opposition to restructuring by leaving the door open for some kind of voluntary debt deal.

“This time around, the ECB looks hesitant to put its credibility on the line,” Brzeski said. “In the end, it will be eurozone governments and not the ECB that have to decide on any debt restructuring.”

The bank also said it would continue offering unlimited amounts of credit to banks “for as long as necessary.” The unlimited credits are a key tool in propping up the banks in Greece, Portugal, Ireland and in some cases elsewhere. Weaker banks remain dependent on ECB credit because other banks are wary of lending money to them.