The Seoul City-run media company operates five channels ― TBS at 95.1 FM in Korean, TBS eFM on 101.3 FM in English, Chinese and Japanese broadcasts under TBS World and TBS TV through cable and IPTV.

“When it comes to radio programs, listeners should feel at ease and find it useful to get practical information for their lives,” Lee Joon-ho, president of TBS, told The Korea Herald. 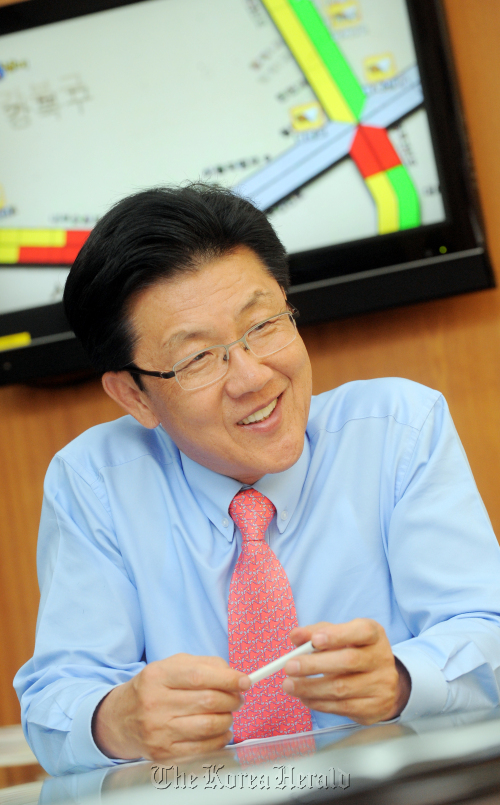 Lee Joon-ho, president of the Traffic Broadcasting System, speaks during an interview with The Korea Herald at the broadcaster’s headquarters. (Ahn Hoon/The Korea Herald)
“I tell TBS staff not to make programs where entertainers and celebrities talk about their private lives. I encourage staff to talk about real life issues like how difficult it is to get a house in Seoul,” he said.

Although TBS seeks public interest first, the rating of its FM radio on 95.1 is staying high at around 13 percent, competing with SBS for the No. 2 spot, next to MBC’s FM radio, Lee said.

The budget of TBS is mostly supported by the Seoul Metropolitan Government and the 2011 annual budget has been set at 36 billion won ($33.2 million), Lee said.

One might question the independence of TBS news programs because TBS is run by Seoul City. However, Lee brushed off such concerns, saying the broadcaster has almost never received complaints or criticism about its news programs in its 21 years of operation.

“In the past 21 years, Seoul mayors have changed a lot but we haven’t had complaints from viewers about our stance,” he said, adding that his predecessors have kept the company’s media independence well through the years.

Although the budget for 2011 has been slashed by about 10 percent from a year earlier, Lee said he will run media channels as effectively as possible.

While TBS on 95.1 FM will focus on Seoul’s local news for residents in Seoul and nearby metropolitan areas, English station TBS eFM will provide information for expatriates living across the nation, he said.

In Korea, other English channels such as the American Forces Network, EBS and Arirang are available but TBS eFM best meets the needs of expats in Korea, Lee said.

“The biggest difference between Arirang and us is that Arirang’s service target is people overseas, while ours is expats here.”

In fact, Korean listeners outnumber non-Koreans when it comes to eFM’s audience, since many Koreans want to improve their English skills. For them, the company offers replay services and English transcripts. TBS has recently launched an iPhone application and the mobile app is used in some universities’ English classes as educational material, Lee said.

With the new media formats based on social networking services threatening the traditional media market, TBS will do everything it can to catch up with the latest SNS trends, but use them only as a tool to check if the broadcaster is heading in the right direction, he said.

“We’re running six Twitter accounts for TBS but they are only tools to check whether we’re really serving the public interest. We’ll launch an iPad app, too, if necessary,” he said.