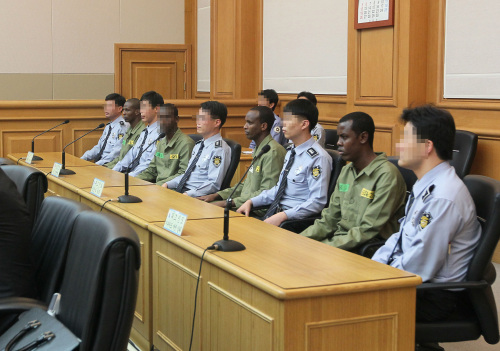 Somali pirates on trial last month after hijacking a South Korean freighter earlier in the year. Prosecutors unsuccessfully sought the death penalty for one pirate for the attempted murder of the ship’s captain. (Yonhap News)

The recent trial of four Somali pirates who hijacked a South Korean freighter once again turned public attention to the issue of the death penalty.

Prosecutors in the case had sought the penalty for one of the pirates for the attempted murder of the ship’s captain. The pirate escaped capital punishment and was given life imprisonment.

Although South Korea has the penalty on its statute books, the country has not carried out an execution since 1997. After taking office in 1998, former President Kim Dae-jung put a moratorium on further executions.

The penalty continues to be handed down for serious offenses, most recently to serial killer Kang Ho-sun in 2009. Previous attempts to abolish the penalty in the National Assembly have failed to pass, and opinion polls suggest a strong majority of Koreans support keeping the punishment. In a further roadblock to abolition, the country’s highest court ruled in February last year that the death penalty was not unconstitutional. ― Ed. 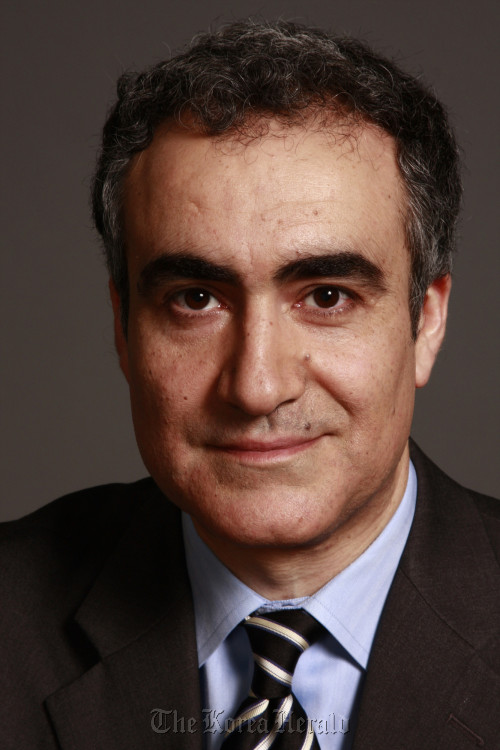 Kim was just 19 in 1994 when he was accused of rape and murder. He claimed to have been beaten by police during his interrogation and forced to make a “confession.” Lacking the means to pay for his defense, Kim was appointed a lawyer who failed to attend all of the hearings for his case. While some of Kim’s co-defendants who had been able to afford good legal representation were given life imprisonment, Kim was sentenced to death. He was executed in secret and without warning at 8 a.m. on Nov. 2, 1995.

Kim’s case serves as a reminder of how cruel and inhuman this punishment is. In many countries around the world, prisoners under sentence of death live in perpetual fear that they might be executed at any time. They are not told of the date of their execution until the day itself. No public announcement of death is made and families are often not informed.

The death penalty is the cold and premeditated killing of an individual by the state. It is the poor, like Kim, or minorities and members of racial, ethnic and religious communities who are most likely to be served with a death sentence. It is often both imposed and carried out arbitrarily.

Three bills to abolish the death penalty are currently awaiting consideration by the Legislation and Judiciary Committee in South Korea’s National Assembly. It is only right that the Members of the National Assembly now be given the opportunity to make a choice on this central question of human rights.

South Korea is now classified by Amnesty International as “abolitionist in practice.” No executions have been carried out in South Korea since December 1997. On taking office in 1998 former President Kim Dae-jung, a former death row prisoner himself, halted executions.

Yet still there is no official moratorium on executions, death sentences continue to be handed down and legislative moves to abolish the death penalty have so far come to nothing. While the practice of the death penalty in South Korea may have changed, as long as it remains in the statute books the risk of its implementation can never be fully eliminated.

There is simply no convincing evidence that the death penalty deters crime more effectively than other punishments. The most recent U.N. study on the issue concludes “research has failed to provide scientific proof that executions have a greater deterrent effect than life imprisonment. Such proof is unlikely to be forthcoming.”

Opinion polls on the death penalty have a tendency to over-simplify public attitudes to capital punishment. What people want is a genuinely effective means of cutting crime. Where politicians advocate the death penalty as a critical deterrent, the public may request it in the belief that it will address the problem. It is the responsibility of political leaders to address crime effectively without resorting to this cruel, inhuman and degrading punishment.

In opposing the death penalty, Amnesty International looks not to minimize or condone the crimes for which those sentenced to death were convicted. As an organization deeply concerned with the victims of human rights abuses, Amnesty International has the greatest sympathy for the families of murder victims. All too often, however, the death penalty prolongs the suffering of the victim’s loved ones while extending that suffering to the family of the condemned prisoner.

An ever growing number of countries have chosen to reject the death penalty and the suffering and injustices it entails. As Amnesty International celebrates its fiftieth year, we can look back on a half-century of progress towards abolition. At the time of Amnesty International’s founding in 1961, only nine countries had abolished the death penalty. That number now stands at 96. The momentum is powerful.

Amnesty International calls on the South Korean authorities to remove the death penalty from their country’s statutes once and for all. The National Assembly should vote on abolition, and we urge lawmakers to vote in support of the global trend against the death penalty. Asia still accounts for more executions than anywhere else in the world. South Korea must seize the chance to join the global trend towards abolition and help lead the way in the region.

The author is the Asia-Pacific Director of Amnesty International ― Ed.

Manslaughter is usually committed in anger without a plan. Angry people are not able to control themselves despite the fear of a capital sentence. However, some people give up their plans to kill for fear of death. It is the reason for the increase in murder after abolishing the death penalty in England.

Criticism has been made of wrongful convictions involving the death penalty. Capital judgment is irrevocable after execution. In addition, human life is so valuable that nothing can compensate for it. In fact, unfortunately, several capital sentences were recently found to be misjudgments after execution in America. However, this cannot be the reason for abolishing the death penalty. For example, car accidents kill hundreds of thousands people every year in Korea.

These deaths are, of course, irrevocable. So should cars be stopped or driven below 30km per hour in order to avoid traffic accidents? No one would insist on that. Capital punishment is the same. Execution of death sentence is irrevocable so judges should be more deliberate when it comes to the capital sentence. Abolishing the death penalty is not the solution.

Opponents of the death penalty point out that it has been discarded in most civilized nations. However, each country has its own circumstance in politics and culture. Most Europeans might agree to abolish the death penalty, but Koreans do not. More than 65 percent of Koreans support the death penalty. Korea does not have to follow other countries.

Opponents insist that capital punishment is cruel, barbaric and immoral in principle. This argument is acceptable. However, it is also acceptable that killing innocent people is crueler, more barbaric and even more immoral.

If the death penalty decreases homicide, it should be accepted despite its cruelty. The death penalty could be abolished when murder has significantly lessened, but now is not the time. Since it is cruel, barbaric and immoral, it should not be overused until that time.

The author is a partner of Seoul Dasol Law Group and former professor at Inha University Law School. ― Ed.