Prosecutors investigating corruption at mutual savings bank are set to scrutinize accounting firms which they say stood by while the lenders engaged in massive illegal lending and cooked books to conceal their true financial status.

Investigators on Wednesday raided an office of Deloitte Anjin LLC in Gwangju, South Jeolla Province, which conducted audits of Bohae Bank. Bohae is one of the seven mutual savings banks whose operations were suspended by the financial regulator earlier this year.

The prosecutors suspect that the accounting firm neglected its duty as an auditor with the knowledge that the bank had doctored books to inflate its capital adequacy ratio.

The ratio required by the Bank for International Settlements is a key measure of a bank’s financial soundness.

The Busan banks are accused of having extended illicit loans worth 4.5 trillion won to more than a hundred paper companies they set up and having engaged in window-dressing worth 2.45 trillion won between 2008 and 2010.

Four out of the five units of Busan savings bank group received a clean audit opinion on their financial statements for the fiscal year of 2009, according to the Financial Supervisory Service. A clean opinion is the highest opinion that can be rendered by an auditor.

In February, the five were suspended by the financial authority for severe capital shortage.

Depositors of the failed banks plan to sue the accounting firms. 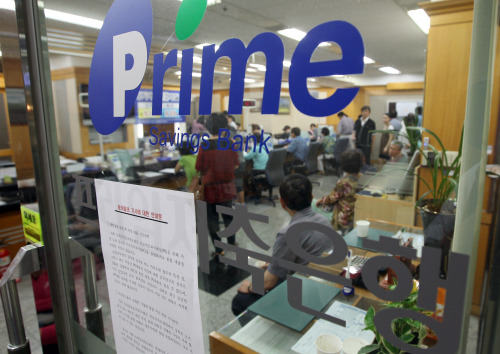 Customers wait their turn at a branch of Prime Mutual Savings Bank in Seoul on Wednesday after reports the bank is being investigated by prosecutors for breach of lending rules. The prosecution said, however, that the probe is different from the ongoing one into the Busan savings bank and that their alleged wrongdoing is not so grave. (Yonhap News)
Kim Ok-joo, who leads a group of customers of Busan savings bank group, said: “I don’t believe that the accounting firms just didn’t know what’s happening as they have conducted audits for years,” she said.

Earlier in the week, bondholders in Samhwa Mutual Savings Bank, which was suspended two months earlier than Busan, filed a damages suit against accounting firm BDO Daejoo LLC, bank executives, the government and the financial regulator.

Twenty two investors who purchased subordinated debt issued by Samhwa claimed that they had relied on audit reports by BDO Daejoo before investing, and that the accounting agency should be held liable for their losses.

Meanwhile, the prosecutors were expected to interrogate Kim Jong-chang, former governor of the Financial Supervisory Service, on whether he peddled influence to ease inspections on insolvent mutual savings banks. It sent him summons twice, but Kim has not yet responded.

Prosecutors suspect that Eun Jin-soo, an arrested former state auditor, may have asked Kim to ease the FSS sanctions on Busan bank group.

The FSS and the Korea Deposit Insurance Corp. had stopped their joint inspection on the lenders for a week in February and April last year.

The prosecution will also question Kim about what led Asia Trust Co., where he had been registered as a board director, to invest in the Busan savings bank.

The prosecution arrested on Tuesday Kim Gwang-soo, commissioner of the Korea Financial Intelligence Unit, who allegedly accepted tens of millions of won in bribes from the Busan bank. Before FIU, Kim was a director at the Financial Services Commission in charge of supervision of savings banks.

In a separate development, it was revealed Wednesday that Prime Mutual Savings Bank is under prosecutors’ investigation for breach of lending rules.

The FSS has requested the probe, after it found that the bank had extended loans in excess of 20 percent of its total capital base to each of the three borrowers, beyond the loan limit set by law.

Prime Mutual strongly denied some news reports that it was being investigated for corruption charges similar to Busan savings bank.

“We have never done such things as setting up of special purpose companies using borrowed names and extending illegal loans to the firms,” it said.