Obama and Merkel had extensive talks about the plight of debt-stricken Greece, which needs a second huge financial bailout, despite some reluctance from some eurozone members to stump up fresh funds.

“I very much appreciated the chancellor’s views on the financial situation in Europe, which we agree cannot be allowed to put the global economic recovery at risk,” Obama said in a joint press conference with Merkel. 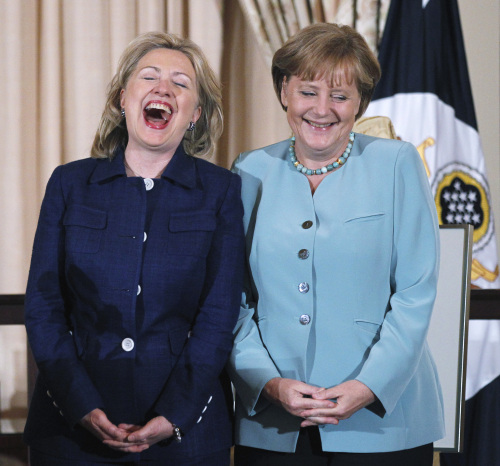 Secretary of State Hillary Rodham Clinton (left) and German Chancellor Angela Merkel laugh during a State Luncheon in honor of the German chancellor at the State Department in Washington on Tuesday. (AP-Yonhap News)
Obama said he was confident Europe would figure out a way to support Greece, adding that Washington would do what it could to help, and noted the “tough” domestic politics faced by leaders organizing bailouts for other countries.

Later at a black tie state dinner steeped in pageantry in the open air in the White House Rose Garden, Obama bestowed America’s highest civilian honor, the Presidential Medal of Freedom, on the German Chancellor.

He hailed her as the first East German, and the first woman to serve as German Chancellor and said the award was a recognition of her status as “an eloquent voice for human rights and dignity around the world.”

Merkel recalled how her parents had cried when the Berlin Wall was built, and said she had “dreamed of freedom” for many years, but said she could never have imagined her reception from a U.S. president at the White House.

The Presidential Medal of Freedom is rarely granted to foreigners but has been presented to Pope John Paul II, Nelson Mandela and former German chancellor Helmut Kohl.

They were then serenaded by U.S. National Symphony Orchestra and singer-songwriter James Taylor.

Merkel’s visit came as Obama seeks to correct an impression that his focus on rising powers like India and China means a downgrade for the transatlantic alliance and as he faces rising political heat over the slow recovery.

Calling one another “Dear Barack” and “Angela” the two leaders praised one another’s courage and the president was to confer the highest U.S. civilian honor on his guest, in an apparent bid to scotch rumors their relationship is cool.

At one point in their joint press conference, the leaders appeared to share a resigned shrug as a journalist asked about frictions between them on Libya and whether they felt the need to “reset” their relationship.

Obama said that Merkel was one of his closest partners on the world stage and that Germany was one of America’s most important allies on issues including Afghanistan, the Middle East, the Arab Spring, NATO and the world economy.

“I very much compliment her on the courage with which she approaches some of these very difficult political issues, at some significant political costs to herself,” he said.

“She’s not finished yet ― she’s got a lot more work to do,” Obama said, in an apparent attempt to offer a political boost to a leader who has gone through a rough political patch at home.

Despite the warmth, Merkel admitted that she and Obama did not always see eye-to-eye.

“Sometimes there may be differences of opinion in such a friendship and partnership,” she said.

Germany caused frowns in Washington by abstaining in a U.N. Security Council vote that endorsed NATO action against Moammar Gadhafi’s forces in Libya ― though both Obama and Merkel agreed Tuesday the strongman would soon be gone.

The Merkel government has also been outspoken about some of the monetary measures the U.S. government and Federal Reserve have taken to revive the U.S. economy.

Merkel also joked that Berlin, which Obama has not yet visited as president, despite several trips to Germany, was always ready to welcome him.

“I can promise that the Brandenburg Gate will still be there,” Merkel joked, in a reference to press reports that she blocked then Senator Obama from using the landmark as a backdrop to a speech during his 2008 White House campaign.