The electronics maker is now aiming for a 40 percent market share of the 3-D industry in the region.

“We believe that our products will be able to offer distinguished, next generation 3-D technology to the consumers in the Middle East and Africa, based on which we will target a 40 percent market share to become the No. 1 manufacturer of 3-D televisions,” said Kim Ki-wan, president of LG Electronics Middle East and Africa region. 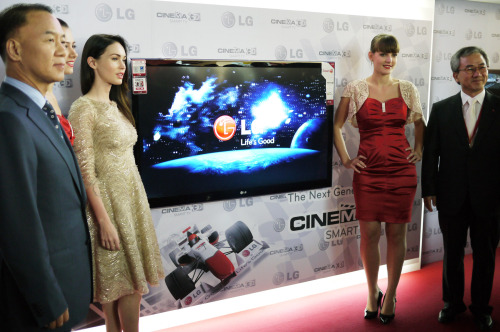 Kim Ki-wan (left), LG Electronics’ head of the Middle East and African region, with Hollywood celebrity Megan Fox at the company’s 3-D TVs launch in Abu Dhabi on Monday. (LG Electronics)
LG’s 3-D televisions and monitors are based on the film-type patterned technology, which it claims to have reduced the side-effects such as flickering and crosstalk found in the shutter-glass 3-D technology used by Samsung and most of its other rivals.

FPR technology also does not require battery-powered eyewear. Both the glasses and the TV sets are cheaper than those produced by shutter-glass.

Citing the smart television functions that the LG 3-D TVs tout, Kim said these televisions are “effectively the most complete television available in the market today for TV viewing, gaming and online connectivity.”

DisplaySearch, a market research firm for displays, projected that the 3-D television market of the Middle East and Africa would grow to 1.69 million by next year, up from the 730,000 this year.

LG Electronics on Monday unveiled its full 3-D lineup to the Middle East audience, including nine of its 3-D TV products, a 3-D laptop, 3-D monitor and 3-D projector.

The launching event at Abu Dhabi’s in Yas Island marked the biggest such global release of a LG Electronics product, the company said.

More than 3,500 people attended, including LG executives, suppliers, consumers and the local media.

Megan Fox, a Hollywood celebrity famous for her role in Transformers, also graced the event at Ferrari World.