The exhibition game was played alongside the final to the eight-team college tournament between Sungkyunkwan University and Hanyang University.

According to Seoul Warriors’ player-coach and club president, Jason Braeden, the team has always aimed to build partnerships within Korea and to promote the sport at a high level through events such as this. 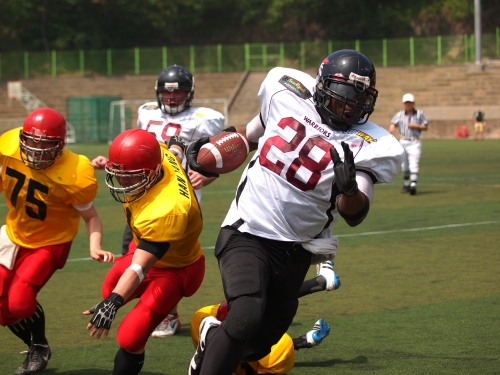 The first quarter started off with free safety Maishon Holdbrooks running in a touchdown from an interception. The captain weighed in with the third touchdown of the day as Seoul Warriors opted to go over the top with a “quarter back keeper” from 5 yards out.

Hanyang University (playing defense in the first half) was unable to stem the tide as Seoul Warriors were afforded the opportunity to put into effect moves talked about in training, at game speed. The last score of the half, a 99-yard run in by strong safety, Jason Selvon, came from a field goal attempt by Korea University’s offense.

For the second half, Hanyang changed to offense with Korea University in defense. The switch did not turn around the fortunes of the college team as the Warriors strung together a series of moves that saw running back Larrick Johnson score two touchdowns in quick succession ― first down the left and then the right.

“I have never had the whole roster make a positive contribution like that,” said Braeden after the performance. He felt the strongest positive, from a training perspective, was that it was a complete team victory where all 37 Seoul Warriors contributed to the win. He did however admonish his charges after the game that much work still needs to be done for a side that had ended its first season in Korea without silverware.

With the second season looming large, Braeden hopes to not only build success with Seoul Warriors in Korea and Asia, but also to nurture a love for the game through continued community involvement projects such as middle and high-school flag football leagues.

It would appear that Sunday’s exhibition game went some way in promoting a love of quality American football in Korea. Hanyang University student and player on the day, Horim Lee, underlined the impact of Seoul Warriors’ effort to build partnerships.

“Our players enjoyed playing against the foreigner team because we can learn a lot from them and the strong competition will make us better,” he said. “I hope to play for them after I graduate from university.”