After the March event pushed venue Craftworks Taphouse and Bistro past capacity, this version will be spread out across 17 restaurants in the Haebangchon and Gyeongnidan areas of Itaewon, Seoul. 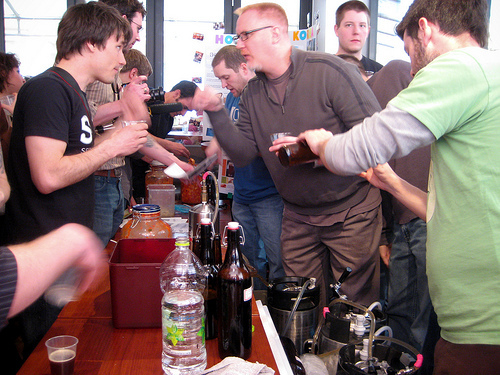 Participants talk over some homebrewed beer at the first Fermentation Celebration at Craftworks Taphouse and Bistro in Itaewon. (Jason Lindley)
“We really kind of packed the place out so for the second one we really wanted to give more of a focus, so we’re going to do a block party,” said Jason Lindley, one of the organizers. “People can go from restaurant to restaurant and at each restaurant there will be just one person serving.”

To encourage guests to keep moving around and trying new things, there will be a scavenger hunt with prizes from O’ngo Studio and Suji’s Restaurant, amongst others.

“Basically we want to give people a reason to go to as many places as possible, so the scavenger hunt is a way to do that.”

The event was born when Lindley and his friends had a get together over some kombucha, a fermented tea high in acetic acid that is touted as a health food. They decided to see if they could do a bigger event, and Lindley said Craftworks’ community focus meant they were happy to do it. It was even more of a hit than they’d hoped.

“We were really shocked at the turnout. We knew that we would get 150 people because our friends would invite their friends, but we didn’t know we’d get 250-300 people coming out,” he said.

The event will start near Indigo in Haebangchon and run from 1 p.m. to 5 p.m. Participation costs 20,000 won.

For more information visit the event’s Facebook page or flavors.me/fermentevent.