Their missions during the Vietnam War ended four decades ago, but they are still fighting a war ― an unexpected one against illnesses resulting from their exposure to Agent Orange, a senior member of a veterans’ group here said Monday.

Pointing to the gray-haired members of the Korean Disabled Veterans’ Association for Agent Orange in full battle dress uniform, its secretary-general Kim Sung-wook stressed that their fight against the toxic chemical continues.

“No one would ever understand our fears of the white powder (Agent Orange). When we joined the defoliation work in Vietnam, none of us were aware or informed of the hazardous nature of the powder,” he told The Korea Herald. 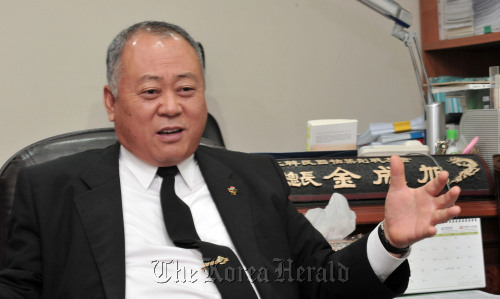 Kim Sung-wook, secretary general of the Korean Disabled Veterans’ Association for Agent Orange, explains his participation in the Vietnam War on Monday. (Chung Hee-cho/ The Korea Herald)
Illnesses from exposure to the herbicide ― including cancers, diabetes, neural disorders and paralysis ― have destroyed not only the lives of the victims, but also those of their family members, he said.

“I was very apprehensive that as I have spoken for the victims, I thought it would be a hindrance for my daughters to marry decent men. There were news reports that the diseases could be handed down from one generation to another,” he said.

“But my daughters say they don’t care about it and are behind me all the way at all times.”

Kim participated in the Vietnam War from December 1967 to April 1969. In about 1983, he began suffering from neural paralysis, diabetes and other problems with his cardiovascular system.

As of March 31, there are about 128,000 Korean veterans suffering from the aftereffects of exposure to Agent Orange, including nearly 35,930 registered as men of national merit who are eligible for compensation from the government. The figure also includes 919 veterans who served in Korean Army units near the Demilitarized Zone where the defoliant was sprayed from 1967-1970.

Touching on escalating public fears over a recent series of allegations that toxic chemicals including Agent Orange were buried at some U.S. military bases in Korea, he called for restraint until the outcome of the ongoing probe is revealed.

Their allegations have prompted public calls for a full-scale environmental inspection of all U.S. military facilities in Korea as well as the 85 sites that the U.S. returned to the Seoul government between 1990 and 2003 without environmental surveys.

“If 250 drums of Agent Orange had really been buried at Camp Carroll, as they claim, the entire Gyeongsang area would have been contaminated and desolated. No living things could live there. I was very doubtful about the allegations,” he said.

“The entire country was shaken by the (unconfirmed) allegations with the media churning out articles on them and escalating public anxiety. That is not good for our national interest. I am not taking the side of the U.S. or anything, but we should not talk carelessly about (the alleged burial of) the chemical until the truth is verified.”

Kim called recent news reports that raised the possibility that the defoliant was sprayed over the DMZ in the mid-1950s “wild speculation.”

“That is wrong. When Agent Orange was first introduced to the world was in 1961 ― when multinational firms developed it. They were probably talking about the insecticide, called DDT, not Agent Orange,” he said.

“We should not talk about something that is unconfirmed. Bringing up unfounded allegations continuously will only confuse the public. That many soldiers sprayed Agent Orange with their bare hands is also wrong. Most of us used aircraft to spray it.”

The government-subsidized association of defoliant victims was established in 1997 to support victims of Agent Orange and their families. It has also carried out a series of campaigns to enhance public security awareness.

One of the crucial tasks facing the association is to push for the lawsuit, which the association filed in 1999 against six U.S. Agent Orange producers including Monsanto Company and Dow Chemical to demand compensation.

A Seoul district court ruled against the plaintiffs in 2002 while an appeals court ruled partially in favor of them in 2006, ordering the payment of compensation ranging from 6 million won ($5,558) to 46 million won to some of the victims.

Saying that the compensation is too small, the association brought the case to the Supreme Court in 2006, which has yet to rule on the case.

“We hope that the Supreme Court will quickly move forward with the suit. It has been pending there since 2006. We don’t know why it does not quickly proceed with the case,” he said.