Back in 1990, a private named Yoon Seok-yang, who had been serving in the Defense Security Command of Korea’s Armed Forces, ran away from his camp with a floppy disk.

The disk had a list of the country’s big figures, including former presidents, religious leaders, politicians, and social activists that the DSC had been illegally investigating. 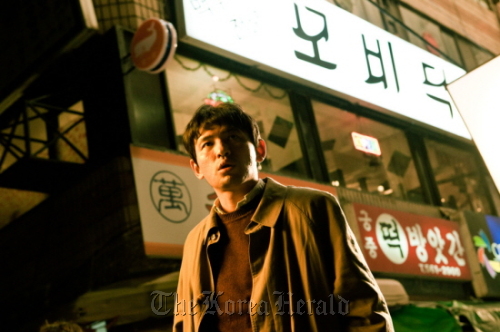 Actor Hwang Jung-min stars as a veteran journalist in director Park In-je’s conspiracy flick “Moby Dick.” (Showbox and Mediaplex Inc.)
“We’ve been promoting our film as ‘the first conspiracy film in Korea,’” Park told a press conference held on May 31 in Seoul. “I haven’t been feeling a lot of pressure about the way it was promoted; I was rather curious about how the audience would feel about this specific genre.”

Starring Hwang Jung-min, Kim Min-hee and Jin Gu, the movie tells a story of veteran journalist Lee Bang-woo (Hwang), who sets up a special investigation team with his fellow reporters after a mysterious explosion occurs near a bridge on the outskirts of Seoul.

As they investigate, they realize there is a group of unknown men that controls the government behind closed doors.

Just like the real-life case of Yoon, the movie also takes place in the early 1990s. The title “Moby Dick,” inspired by the Herman Melville novel, also refers to the name of a cafe that was operated by DSC. Located near Seoul National University, the cafe was used to by DSC members investigate ordinary citizens, according to Park.

In the film, there are a number of scenes where Lee Bang-woo dreams of touching the skin of a giant whale under the sea, while not being able to see the whole mammal. An obvious metaphor inspired by the Herman Melville novel, director Park said these scenes reflect another meaning of the title, “Moby Dick.”

“It might sound a little too pessimistic,” he told reporters. “But I wanted to show that even if Lee Bang-woo tries hard to unmask the powerful conspirators, he can never get the real picture of who they are ― just the way he can only touch small parts of the giant whale.”

Actor Hwang Jung-min, who gives a superb performance as a veteran journalist, said he had several meetings with former journalists in preparation of his role for the movie.

“Because the movie’s set in the 90s, I met up with a lot of newspaper editors who used to work as staff reporters at the time,” Hwang said. “I asked them about what it was like to go through the deadline, how their desks looked, how they used their squared manuscript paper, how often they changed their clothes, what kind of shirts and shoes they wore. These trivial details helped a lot. But I set the Lee character on my own.”

Hwang, who joked about being “comfortable” around reporters since he appears as a “good journalist” in the movie, said the conspiracy genre should not make the film difficult for the viewers to understand.

“I don’t want people to think this movie is a complicated one just because it deals with conspiracy,” Hwang said. “It’s a meaningful and powerful film. I hope our viewers can see that.”