Normally a street that contains a harmonious balance of both tranquility and bustling excitement, Insa-dong can leave you with a sense of what Korea might have been.

But with the recent crackdown on street vendors, many foreigners are left wondering why the streets look like a warzone and stores are without customers.

After deciding to create a street without cars, and to expand the space for pedestrians at Insa-dong, the Jongno District Office is attempting to relocate the street vendors, who are technically illegal, to designated sectors off the main road.

But street vendors were unanimously favored by foreigners visiting Insa-dong, despite district officials insisting that foreigners do not want them there.

“I like it (street vendors) because they make the food right in front of you and its fun, and they are certainly cheap,” said Ben Whittaker who was visiting from Australia.

And according to the district office, foreigners are their main target demographic for Insa-dong.

“We absolutely enjoy the street stalls, and what they have here at the moment is a nice balance between street stalls and stores,” said Thomas Gervay from Australia.

According to Kim Keun-ki, leader of an association of the street vendors, this is the only thing he can do for a living, saying that street vendors do not have the luxury of choice. 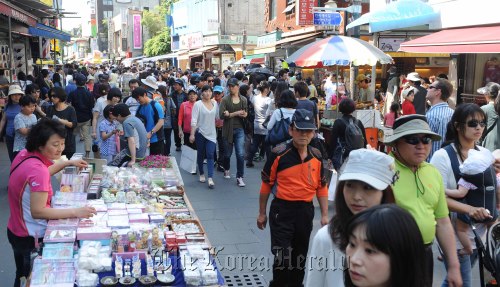 The main street of Insa-dong bustles with street vendors, shoppers and tourists Sunday. (Lee Sang-sub/The Korea Herald)
“Elementary school education was the only education I got, so I can’t even submit a job application because no one wants to hire an elementary school grad,” said Kim who owns a Korean taffy, or yeot stall.

And what the vendors are most upset about is that they are being relocated from the busiest areas of Insa-dong to an area that the vendors call “the grave,” according to Kim.

The district’s recent crackdown on street stalls has only led to violence on the streets, broken stalls, injured vendors, district officials and foreigners passing by, and empty stores.

“Because of this (protest) Insa-dong is in disarray right now, we have less customers coming in because the surrounding area has become so rough, said a store owner who declined to give her name.

“For every day there is violence in our streets, we lose that many customers,” said a former street vendor turned store owner.

“The people who are truly affected by all of this are the store owners who simply lose customers because of the fights between the district office and the street vendors,” said another store owner in an alleyway at Insa-dong.

However, despite the popularity of street stalls among foreigners, to most store owners the recent string of violence is just another problem that street vendors bring to Insa-dong.

“It’s completely unreasonable that the street vendors are still protesting, despite the district’s attempt to look the other way and accommodate them,” said the former street vendor.

“We have to pay expensive key money deposits, rent and various taxes that really add up too, but vendors do not pay a single won to the government for the public land that they use,” said a calligraphy store owner.

And store owners feel further victimized by the vendors, often portrayed in the media as people struggling to make ends meet, when according to the former street vendor, most vendors easily make more than 100,000 won a day.

“Many of them have a small fortune,” said the store owner who declined to give his name.

“Some operate several stalls that have part-time hires working them in different locations,” he said, who still keeps close ties with many of the street vendors at Insa-dong.

According to multiple sources, the street vendor’s alliance at Insa-dong, is not just a means to band together to face the district, but it is also an organization that rules the cultural street with an iron fist.

“I’ve seen people set up a little street stall in Insa-dong, only to be harassed by street vendors in the alliance, eventually leading to violence,” said a store owner.

According to the store owner, the key money deposit for public spaces on the street can cost up to 50 million won, and those that do not pay, face the consequences.

“When I ran my own stall, I got permission from the store owner I was selling in front of, but the alliance still came and tried to stop me from doing business,” said the former stall owner.

“We even landed in the police stations a couple times because things got violent between us,” he said.

The district office has found itself in a dilemma, after declaring Insa-dong street a pedestrian zone, inevitably clashing officials with the vendors.

According to Choi Sung-min director at the district office’s Construction Management Division, the motion to relocate the vendors is to create a friendly walking environment, despite many foreigners agreeing that you can simply walk around them and that it does not cause much hassle.

However, Choi added that the district office is still undergoing talks with the street vendors’ alliance to create a peaceful solution.