TOME, New Mexico (AP) -- Nine year-old Bobby Bradley floated into history early Saturday, taking off solo in a hot air balloon and landing perfectly about a half-hour later to become the youngest trained pilot to accomplish such a feat.

As the morning sun rose in the remote New Mexico town of Tome, Bradley took off in the company of three other balloons, whose pilots included a designated balloon examiner for the Federal Aviation Administration. A crowd of about 50 supporters, including family, friends and classmates, cheered as they took off.

``It was awesome. It was amazing. I loved it,'' he said after the successful flight.

His father, Troy Bradley, proudly remarked that his son ``flew the way we knew he could.'' 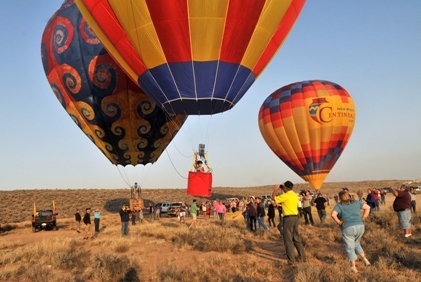 With a crowd of family and friends cheering him on, Bobby Bradley, 9, launches his hot air balloon for his first solo flight near Tome, Ariz. on Saturday, June 4, 2011. Nine-year-old Bobby Bradley floated into history early Saturday, taking off solo in a hot air balloon and landing perfectly about a half-hour later to become the youngest trained pilot to accomplish such a feat. (AP)

For the past week and a half, the younger Bradley had been practicing takeoffs and landing in an ultra-light balloon built specifically for his big day.

Bradley on Friday afternoon said that the weather forecast was looking perfect for his son's early morning flight and a caravan was being planned from a local hotel parking lot to the site where Bobby will launch his balloon.

A week and a half earlier, Bobby watched anxiously as his father tested the new ultra-light that was built by family and friends from a larger traditional hot air balloon that he was piloting with his mother, Tami Bradley, and fellow pilot Randy Rogers. His mother said he pleaded with his dad over the radio that day to let him fly it that day.

Bobby has been flying in balloons for more than half his life, with his parents and some of the sport's most experienced and decorated pilots. He has nearly 30 hours of flight time with his father in a standard hot air balloon. But he can't get his pilot's license until he's 16, so his family and friends built the smaller balloon that is classified as an ultra-light aircraft to enable Saturday's solo flight.

Raymond Bair, a designated balloon examiner for the Federal Aviation Administration in New Mexico, planned to watch Saturday's flight. He said he was not particularly concerned about Bobby's safety because of his extensive training and his father's reputation as an instructor.

``I have worked with a lot of Troy's (his father's) students who have come in to get their certification and find them to be extremely well prepared and confident in all the flight aspects,'' he said.

Tami Bradley said she is more worried about the little things, like ``him needing to go to the bathroom.''

Troy and Tami Bradley have been licensed pilots since they were teenagers. He made his first solo flight when he was 14 and earned his license at 16. She earned her license at 17.

The two won the America's Challenge Gas Balloon Race, one of the country's biggest events in balloon racing, in 1998. Troy Bradley also helped pilot the first balloon to fly from North America to Africa and has set dozens of world records in ballooning.