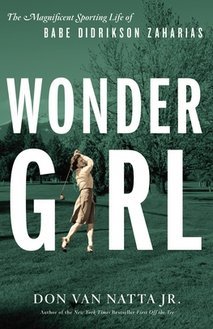 Babe Ruth, Muhammad Ali, Michael Jordan, Wayne Gretzky ― they were all great athletes, some of the best the 20th century had to offer. But none excelled in as many sports as Mildred “Babe” Didrikson, the two-sport Hall of Famer who helped found the Ladies Professional Golf Association and won more consecutive tournaments than any man or woman in U.S. golf history.

Born a century ago to penniless Norwegian immigrants in Port Arthur, Texas, Didrikson came of age at a time when professional sports opportunities for women were almost nonexistent. To make matters worse, she was subjected to vicious attacks because of her boyish appearance and brash manner.

Through an almost pathological degree of hard work and a genius for intimidating competitors, Didrikson shone at virtually every sport she tried, including baseball, boxing, swimming, diving and bowling. She was a basketball All-American and won three Olympic track and field medals before finally devoting herself to golf.

How Didrikson qualified for the 1932 Los Angeles Games is one of many remarkable anecdotes about this remarkable woman in New York Times reporter Don Van Natta Jr.’s new biography, “Wonder Girl: The Magnificent Sporting Life of Babe Didrikson Zaharias.” As a publicity stunt, her coach in Dallas had sent her to the qualifying meet as the sole representative of her track team. Competing in eight of 10 events, she single-handedly won the national championship, finishing first in five events and tying for first in a sixth. (AP)

Van Natta, who previously wrote about golf in the 2003 “First off the Tee: Presidential Hackers, Duffers, and Cheaters From Taft to Bush,” greatly admires Didrikson, calling her the greatest all-sport athlete ever, but spares no details of her obnoxious, selfish, showboating personality, especially early in her career.

Once she settled on golf as her meal ticket, however, she was smart enough to realize that being gracious might serve her better in such a genteel, country club sport. When she was stricken with rectal cancer ― the disease that finally killed her in 1956 ― she became magnanimous, dedicating her wins to cancer patients everywhere.

Her victory at the 1954 U.S. Women’s Open by an incredible 12 strokes, just 15 months after a colostomy, was “probably the most incredible athletic feat of all time, given her condition,” wrote Los Angeles Times sports columnist Jim Murray. “People all over the country who had been resisting the operation, preferring terminal cancer to it, began changing their minds ― and saving their lives.”