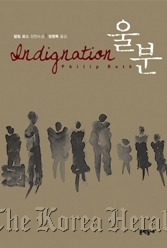 Nobody really “gets” adolescence. Not the kids themselves, not the parents and teachers who have left it behind. Not even us as we look back years later. It implies mystique. An alluring mix of whimsy and danger, when everything seemed more important than it was, but also more possible. How do we lose that sense of possibility? In answer, American author Philip Roth’s 2008 novel “Indignation” presents a tragic portrait of a young Jewish-American college student in the second year of the Korean War.

Up until entering Robert Treat College in Newark, New Jersey, Marcus Messner is a good boy in every possible way. He gets A’s and is a key baseball player at school, only hangs out with the “good girls,” and happily helps his father ― who runs a butcher shop ― almost every weekend. But things begin to change when Marcus enters college, as his father suddenly becomes irrational and overly-protective. The butcher is consumed with fear about the dangers of adult life, the world, and the “uncertainty” that awaits his son.

Marcus transfers to Winesburg College in Ohio to escape his father. At Winesburg, he falls for a fellow student Olivia Hutton, a suicide survivor. Sexually inexperienced, Marcus is bewildered and confused by his first sexual encounter with Olivia. He also continues to get into trouble with his roommates and the dean of men, Hawes Caudwell. In the meantime, Marcus is always worried he might be sent to the Korean War if he ever gets expelled from school. After setting a goal to become a lawyer, Marcus purposely isolates himself from every school social gathering only to study in peace and receive good grades.

Being an atheist with a Jewish background, Marcus also objects to the chapel attendance requirement at Winesburg. Dean Caudwell later finds out Marcus has been paying another student to attend chapel in his place. Caudwell makes him attend double the amount of chapel services as punishment. Marcus refuses, and gets expelled from Winesburg a few days later. His expulsion allows the U.S. Army to draft him and send him to Korea.

“Indignation” is a realistic portrait of adolescence. It shows how a young soul with a promising future, with countless possibilities, can get totally ruined by history and adolescence itself. The novel implies Marcus’ recklessness, inexperienced worldview, as well as his natural pursuit of sexual pleasure can all lead to a tragic ending. It is almost as if he is getting punished for simply being young, or for making important mistakes while growing up. For Korean readers, the book will offer a glimpse into stories of the U.S. soldiers who participated in the Korean War.