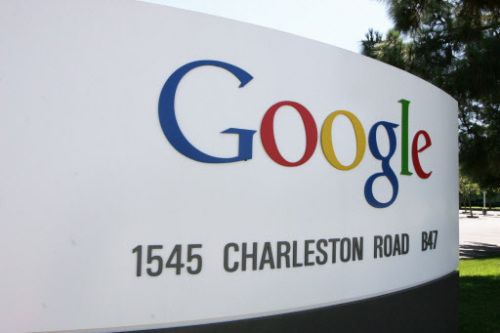 The logo of internet search engine company Google at the headquarters in Mountain View in Silicon Valley, south of San Francisco. (AFP-Yonhap News)

"The goal of this effort seems to have been to monitor the contents of these users' emails, with the perpetrators apparently using stolen passwords to change peoples' forwarding and delegation settings," he said.

The campaign appeared to originate in Jinan, China, Grosse said, and targeted the personal Gmail accounts of hundreds of users of Google's free Web-based email service.

"Google detected and has disrupted this campaign to take users' passwords and monitor their emails," Grosse said.

The White House was investigating the situation but had no reason to believe that Gmail accounts of senior government officials were hacked, an official told AFP.

"We're looking into these reports and are seeking to gather the facts," the official said on condition of anonymity.

"We have no reason to believe that any official US government email accounts were accessed," the official said, referring other queries to the Federal Bureau of Investigation.

Google noted in its warning that personal Gmail accounts were targeted.

"In addition, it is often being checked at home in a relaxed atmosphere, which helps to catch the victim off guard, especially if it appears to arrive from a frequent contact," Contagio said of personal email accounts.

"Some people have a habit of forwarding messages from enterprise accounts to their personal mail for saving or easy reading."

Links to supposedly view or download email attachments led people to fake Gmail login pages where entered information was harvested and then used to secretly get into accounts, the Contagio advisory indicated.

Google said the California-based firm's systems and servers were not attacked.

There was no indication whether the Gmail spying campaign was related to a China-based cyberattack on Google that prompted the company early last year to stop bowing to Internet censors in that nation.

Google essentially handicapped itself in the booming China market by shifting mainland Chinese users of its Chinese-language search engine Google.cn to an uncensored site in former British colony Hong Kong.

Google's decision came after the company, whose motto is "Don't Be Evil,"

threatened to close its Chinese operations because of censorship and cyberattacks it said originated from China.

China reacted quickly to Google's move saying it was "totally wrong" to stop censorship and to blame Beijing for the cyberattacks that Google said targeted email accounts of Chinese human rights activists.