Something is brewing in Korea’s expat scene.

A community of foreign beer makers across the country are taking the country’s ale situation into their own hands.

Fed up with lackluster beer made in Korean factories, they are making their own.

After five years of insipid lager, Titley took the plunge three years ago and took up the hobby.

“I just went through all this process,” he explains. “What do I do? How do I do this in Korea? Can I get this ingredient in Korea?

“Originally it just started out with me having a blog and just sharing things that way. Within a week or two I had people asking me questions and that’s when Homebrew Korea started.”

About six months later, he set up a forum on the site where brewers could swap hints and tip-offs. Now it has become a community with 30-40 active brewers that has regular events including a large get together two or three times a year.

The most recent was the Brew Your Hops Off competition on May 14. Homebrewers from as far away as Jeju and Geoje Island came to submit entries in three categories, and beer fans got to try some brews and enjoy a free bar at the Oktoberfest microbrewery pub in Gangnam, Seoul.

Brewers also brought beers that weren’t entered in the competition to get feedback. They swapped opinions on how brews could be improved and tips on Heath Robinson substitutes for equipment.

“Everybody shares their beer and of course everybody is welcome to share their criticism, because that’s how you get better,” explains Titley.

One brewer met someone who had processed malt for him for the first time, having arranged to send and receive the ingredients on the website.

Sixty-two beers were entered, and Titley says he and the other judges ― food writer Joe McPherson and wine consultant Josh Hall ― were somewhat overwhelmed. He said that for the next event, which will probably be after a long summer break, he plans to change the way the beers are judged.

“I’m not exactly sure how, but possibly having the beers submitted and judged ahead of the competition,” said Titley.

“I’d also like to get more involvement from the Korean community. The Korean brewers are hesitant to attend because of the language differences I think.”

Adam Mathews, who came from Jeju for the event, won the dark beer and stout category. 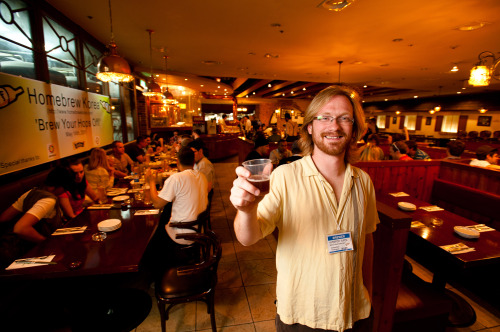 Adam Mathews, winner of the stout category at Brew Your Hops Off. (Dylan Goldby)
“Distance wasn’t a factor” he says. “I had to take a bus, a plane and then another bus to get to the event but I wouldn’t have missed it for the world.“

For Mathews, brewing is a serious undertaking.

“It’s my future career. It’s not a hobby to me. I’m planning to work for small microbreweries for 5 or 6 years, to get my experience up, possibly get some professional level qualifications through a study program and then apply for my own brew pub,” he explains.

His job in Korea gave him the time and money to start brewing. Now he uses the opportunity to learn about his chosen career.

“It’s the noise the pump is making or the way the foam forms at the top of the brew kettle. You think ‘Oh why is this different?’ and you think about it and change the process here and there.”

Jason Lindley, who came third in the same category, started brewing using a basic kit, around the time Homebrew Korea started. His reasons for taking up brewing were more similar to many of the other members.

“The beer in Korea is pretty awful,” he says. “They all use fairly poor ingredients. When I came to Korea I came from New York City, which was re ally getting into microbrews at the time. So I was pretty disappointed when I came out here and there was nothing.”

He says the most unusual beer he’s made is a mushroom IPA.

“Korea has a really huge selection of mushrooms, and one of them is called Yongi mushroom. It’s pretty much perfect for beer ― it’s bitter, it’s woody, and it went extremely well with the IPA. It gave it an earthy tone that a lot of IPAs don’t have.”

Besides that Lindley makes kampucha, a kind of fermented tea. After a kampucha get together he held got a good reception, he decided to hold a celebration of fermented food in March. Cheesemakers, brewers, picklers packed Craftworks Taphouse in Itaewon for the event.

He is one of a number of expats who have similar frustrations about food that brewers have about beer. Mathews says he makes his own cheese and knows people who smoke their own bacon, adding that they had a bartering food market on Jeju recently.

Food making has been added to the Homebrew Korea forum, the part of the site where people swap advice and practical help. Since many of the members started brewing recently and in Korea, it’s a good place for beginners.

Titley says that basic equipment costs around 150,000 won ($140) and estimates costs for ingredients at around 70,000 won for 5 gallons, although the price varies a lot.

“People tend to like the IPAs and the really bitter ales because they are the popular beers in America and you definitely can’t get it here,” says Titley when asked what the most popular beers were.

The biggest obstacle in Korea, according to the Homebrew Korea founder, is the lack of availability of materials ― and a whacking 276 percent import duty on malt.

“There’s all kinds of malt but the stuff that gets imported by the Korean brew shops is rather limited,” says Titley. “You can make any beer you want but sometimes you have to fudge it a little bit.”

Mathews points out that the level of complexity is up to the brewer.

“You can sit there and work on your technique as long as you want but if you just want to make something you can,” he says. “Anybody can make beer. It’s fun and it’s easy and you don’t need too much technique.”

Homebrew Korea can be found at www.homebrewkorea.com.