Surrounded by a large crowd of locals, the foreign student asked the audience to repeat after him, “May-ra nam Kimchi h-eh.” He was teaching how to say what his name is in Urdu, his mother tongue ― his Korean name is Kimchi. 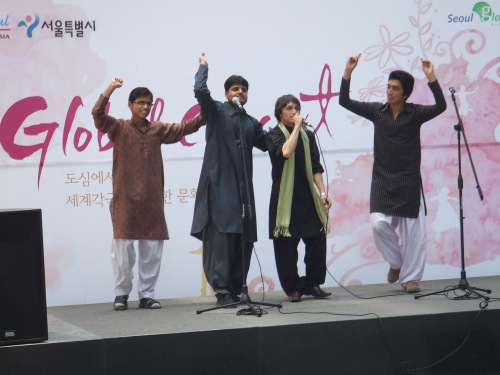 Pakistani students in Seoul dance to Pakistani traditional music as part of Seoul Global Center’s Global Concert series in Mugyo-dong, Seoul. (Seoul Global Center)
Zahid Hussain, a student at Korea University, is one of four members of a Pakistani performance team forged by the Embassy of Pakistan in Korea. Hussain and three of his friends, who are students at Seoul National University, were showcasing various Pakistani regional dances and songs at the Global Concert on May 24.

These four foreign students presented a unique insight into their home country’s culture, through dance, song, language, and costumes. It was engaging and educational to listen to the beautiful music. The performers invited people onto the stage during the performances and got a good reaction from the audience.

According to the team, today’s concert was arranged the theme of love for their home country and love of friendship. Pakistan Ambassador Shaukat Mukadam was also present, and he hopes that the Pakistani performance team will help promote understanding and narrow the cultural gap between the people of Korea and Pakistan.

“I have been living in many different countries and the idea of a global concert where international performers and musicians can provide educational and entertaining aspects of foreign cultures for both foreigners and locals is very unique and meaningful,” said Ali Mukadam.

The Global Concert is organized by the Seoul Metropolitan Government and the Seoul Global Center, a comprehensive support organization for expats residing in Seoul. The concert was designed to promote various cultures from around the world and boost mutual understanding between locals and international residents, especially as Seoul has an increasing number of foreigners flooding into the city.

In front of the performance stage, there was a food stall offering traditional Pakistani foods including samosas, kebabs and pakoras. In addition, photos, brochures and traditional costumes were displayed, and SGC volunteers explained Pakistan’s culture, customs and food.

Most of the audience, as well as passers by and workers from nearby offices, could not ignore the delicious smells of the food stand, gathering around and tucking in.

One asked if a samosa was some kind of dumpling. After trying it out, he exclaimed, “It’s delicious, actually it tastes better than I thought it would.”

Another woman in her 50s said the concert was a good chance to learn about Pakistani culture and she was considering visiting Pakistan for a vacation this year.

The Seoul Global Center’s Global Concert series will take place between 12 p.m. and 1 p.m., on most Tuesdays and Thursdays from May until October, except during July and August. A total of 45 performance teams from 25 different countries will present cultural artistic performance programs on the Global Street Outdoor stage in Mugyo-dong.

It’s an open invitation to the general public. Starting with a tango dance team from Argentina, who will stage a performance on the 2nd, June is full of interesting performances including a Canadian belly dancing team, Native American dance performers from the U.S. and a percussion team from Brazil.

For more information, please contact the Seoul Global Center at (02) 2075-4135 or dhdlekgkgk@hanmail.net.

Michelle Kang is senior English editor at the Seoul Global Center. She can be reached at michyk@sba.seoul.kr ― Ed