After the success of a similar festival last year, KaBrew manager Park Chul invited six Korean-based bands, including Vidulgi OoyoO and the Used Cassettes to rock the Cheongpyeong Riverside Beer and Mexican Grill Festival from noon ‘till late. 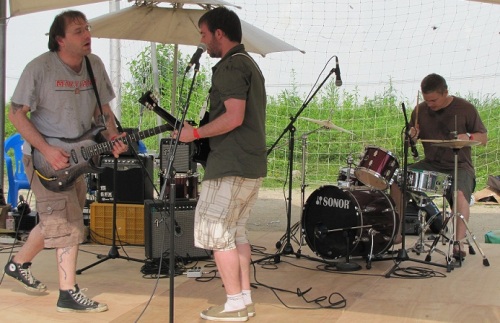 Seoul City Suicides play at the Cheongpyeong Riverside Beer and Mexican Grill Festival in Gangwon Province. (William du Plessis)
Crowds started gathering around midday as local expat band Magna Fall kicked off proceedings with their distinctive brand of indie rock. When their last note faded to the applause of the appreciative audience, event organizers helped quench thirst caused by the day’s sun with a beer-chugging contest. Those stepping up to the challenge got the chance to sample the five types of micro-brewed ale on offer in quick succession.

Grilled Mexican food dealt with hunger pangs, and Seoul-based rock bands No Respect for Beauty and Seoul City Suicides took to the stage, followed by expat four-piece Angry Bear as darkness descended. Partygoers danced and applauded the indie rock to the glow of a bonfire.

“It’s difficult to find good quality beer of home here in Korea. This festival has given us the chance to come out here to enjoy the green, the music and a taste of homebrew away from the grayness of the city,” said Seoul-based English teacher, Adam Prezbindowski.

Park believes that events like these can bridge cultural gaps and build understanding between expats and locals.

“That is why we opted for a mix of three Korean and three expat bands for this event,” he said.

Earlier this year, KaBrew used the same relaxing recipe of music and microbrew to launch a sunset cruise from Incheon.

“More than 300 expats and Koreans watched the setting sun while relaxing in each other’s company. We will continue to use events like this to help expats in Korea feel more at home while enjoying our quality beer,” Park said.