The latest data, collected in March, has fanned public concern amid recent allegations that the U.S. Army buried a large amount of Agent Orange in one of its camps in southeastern Korea three decades ago. 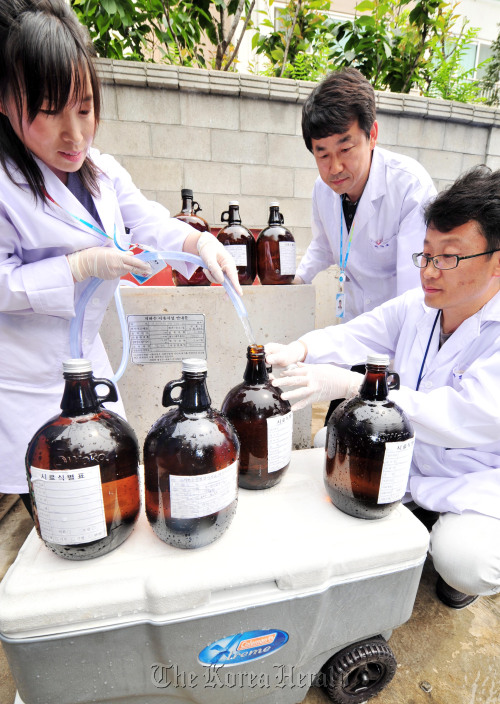 City officials take samples of underground water near Camp Mercer in Bucheon, Gyeonggi Province at which the U.S. Army is suspected of burying toxic chemicals in the 1960s. (Kim Myung-sub/The Korea Herald)
According to the ministry, 23,405 war veterans and former civilian employees in the army were compensated by the government for their defoliant aftereffects, while 52,848 others received benefits for “suspected” cases.

Another 36,582 beneficiaries had symptoms that the ministry recognized as associated with exposure to the toxic defoliant, though not directly. And there were also 57 children who became ill due to their parents’ exposure to the chemical.

Under the current law, which is to expire in Dec. 21 next year, eligibility for compensation claims over the toxic herbicides is given to those who participated in the Vietnam War between 1964 and 1973 or worked in the areas near the Southern Limit Line between two Koreas from 1967 to 1970.

The “registered patriots” with defoliant exposure symptoms are divided into seven levels, and accordingly receive different amount of compensation from 322,000 won to 4.54 million won a month, along with other education and medical benefits.

Others who became ill are also given compensation depending on their extent of disability.

“If an additional defoliant disposal is officially confirmed in other places and periods, including the latest case at Camp Carroll, the Defense Ministry and related government agencies will consider revising the law to extend the range of beneficiaries,” said a ministry official.