Hana Bank has been securing mutual investment with Chinese banks under its long-term vision to develop a future growth engine and diversify asset portfolios via overseas expansion.

The commercial bank, which opened its first office in Shanghai 15 years ago, views China as one of the most lucrative markets.

Over the past few years, the bank has set up Hana Bank China, with total assets of $1 billion and branches in cities such as Shanghai, Beijing, Shenyang, Qingdao, Yantai, Changchun and Harbin.

A spokesman of Hana Financial Group, the parent company of Hana Bank, said the lender has set the vision of becoming one of several competitive foreign banks in China.

“Aside from expanding our deposit base, we will improve profitability and lower dependence on capital-raising from Chinese banks,” he said. 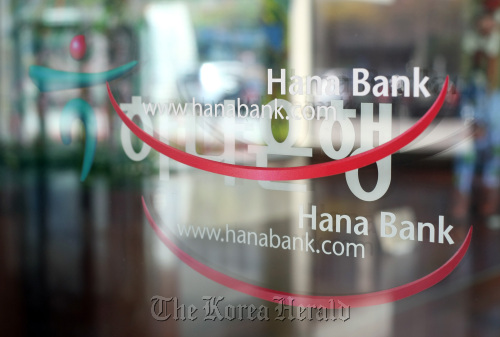 The logo of Hana Bank is displayed at the bank’s headquarters in Seoul. (Bloomberg)
This year, Hana Bank established a strategic partnership with China Merchant Bank, the country’s sixth-largest lender, beefing up ammunition for its planned portfolio diversification and expansion of China operations.

In a statement, the bank said the agreement would involve cooperation on a range of joint financial services and interchanges of staff.

Hana Financial expects the tie-up with China Merchant Bank to have a positive effect on Hana SK Card as the strategic partner has a 23-percent share in the Chinese credit card market.

After the 2008-2009 financial crisis, Hana Bank made achieving qualitative growth and financial soundness both at home and abroad a top priority.

“Overcoming the global crisis, Hana Bank made headway in its move to create an Asian Belt by achieving remarkable growth in China,” a bank executive said.

It is also tapping countries with abundant natural resources such as Russia, Kazakhstan, Uzbekistan and Ukraine.

Hana is operating its corporate entity in Indonesia with 16 branches. It has representative offices in Ho Chi Minh, New Delhi and Dubai. Offices will also be opened in Moscow and London.

Hana has also been aggressive in taking the lead in launching noteworthy financial products in the domestic market.

In February, the bank unveiled the unique product of apartment-collateralized loans which could be available with no documents and no visits, dubbed, “Hana Mortgage One.”

Hana has applied for a patent for the nation’s first-ever loan product.

It also introduced a “money market deposit account-type time deposit” in April. The product has been regarded as a new concept in the financial market which secures high interest rates.

In coordination with its brokerage affiliate Hana Daetoo Securities, Hana Bank is looking to find new revenue resources in the investment banking sector.

In 2010, the bank won an award for its efforts to provide consumer-oriented products and services.

Awarded by the Korea Society of Consumer Studies, the accolade recognizes the best consumer-oriented company in Korea every year.

The bank’s parent Hana Financial Group has implemented a range of environment protection campaigns, designed to remove harmful plants from rivers and raise funds for the protection of the environment.

It has also participated in the government’s Low Carbon, Green Growth policy with a campaign called “No Car Day” each month.

The financial group has cultivated 133 hectares of woods in Gyeonggi Province, from April 2007 under an agreement signed with the Korea Forest Service in June 2006, the first of its kind among local financial companies.

It has also engaged innovative ideas to share the benefits of forests with more people by improving hiking courses, planting trees and installing information signs.

It has implemented the “Hana Program for Visiting Beautiful Woods Together With Children,” hosted jointly with the Wood and Culture Research Society.

The campaign is an experience-based education program that helps children realize the value of nature through personal experience.

Hana Financial has also developed a wide range of events to promote green culture in the Korean community. The “Hana Green Concert” is one of the group’s primary means of highlighting the importance of environmental responsibility.

Since 1993, the concert has been held in all regions of Korea, especially targeting rural areas where people have limited access to art and cultural events. Each concert aims to raise awareness of conservation and sustainability.

Audiences are invited to take a moment to consider their own consumption, and to make resolutions concerning the use of air conditioners, electricity and automobiles, as well as promoting conservation practices.