Investment in reproductive health, which includes family planning, is one of the most effective ways to address a broad range of development needs, said Suzanna Dennis, research associate of Population Action International, in a workshop hosted by the Planned Population Federation of Korea, 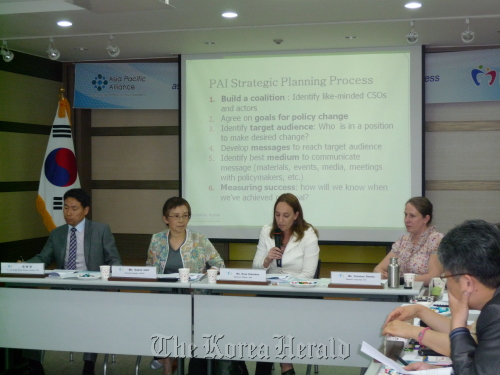 Cha Kwang-myoung (left) of the Korean Parliamentary League on Children, Population and Environment and other panelists listen as Rose Koenders (third from left), executive director for the Asia Pacific Alliance, speaks at the workshop for reproductive health and aid in Seoul on Saturday. (PPFK)
Results have proven the importance of aid in reproductive health. In Zambia, every dollar invested in family planning has saved $4 in other sectors, said Dennis.

The workshop was held in preparation for the Fourth High Level Forum on Aid Effectiveness which will open in Busan later this year. The event is expected to draw about 2,000 participants from all over the world as part of efforts to provide effective aid to recipient countries.

As Korea has the unique experience of transitioning from a recipient to a donor country within decades, and the PPFK is looking to make an impact in the development agenda.

Among the experts attending the workshop was Sumie Ishii, executive director of the Japanese Organization for International Cooperation in Family Planning, and Cha Kwang-myoung, director general of the Korean Parliamentary League on Children, Population and Environment.

According to Rose Koenders, executive director for the Asia Pacific Alliance, 44 percent of all the maternal deaths in the world occur in Asia-Pacific countries, with Nepal, Bangladesh and Cambodia some of the highest.

Koenders said that in Asia live 55 percent of the world’s population that is sexually active but neither uses condoms nor wants a child. Only 47 percent of married women use modern contraceptives in South Central and Southeast Asia.