The plan is part of their long-term strategy called “Tourism Vision 2020” to boost regional tourism and establish a risk management system, especially since natural disasters such as the March earthquake and tsunami in Japan have prompted worries in the region’s tourism industry. 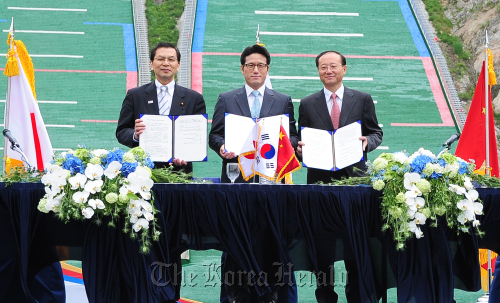 Under the agreement, the three will develop the 10 tourism routes and announce the progress and results at the next tripartite meeting in Japan next year.

Each country’s tourism authorities and related agencies will promote the 10 routes overseas in multiple languages including Korean, Japanese and Chinese.

The three also said they will draw up “special promotion and risk management manuals” to minimize negative impacts of natural disasters on the tourism industry.

“Radiation levels in Tokyo are similar to those in Seoul and Beijing now. Japan is safe,” said Ohata, urging Korean and Chinese tourists to visit Japan, during a press conference in PyeongCheong.

The statement also said that Korea, Japan and China will later sign on a “Fair Tourism Initiative” to curtail dumping prices of travel agencies and excessive shopping requirements in tour packages.

More than 300 industry experts gathered from the three countries at the forum, to express opinions on the 10 travel routes to be developed based on three-shared cultural contents of food, history and cultural relics.