Hwang became the first Asian chief of the international body of practitioners promoting the common interest of securities companies worldwide.

“I hope to add to the ICSA’s reputation as the association improving smooth running of capital markets around the world,” Hwang said, accepting the nomination.

The ICSA is a non-profit body of securities companies assembled together to exchange information at a global level and provide a common voice to regulators.

One of the world’s largest bodies of its kind, ICSA is comprised of 15 organizations in 11 countries, and members include trade associations and self-regulatory groups representing the majority of the world’s equity, bond and derivative markets.

“Cooperation among industry participants has become ever more important with the regulatory environment changing rapidly since the financial crisis of 2008-9. Hwang’s new post is expected to help better represent the voice of emerging market players,” KOFIA said.

The nomination was notable for being the organization’s first vote-based selection. In the past, most presidencies of international bodies in the industry such as the International Council of Securities Association and Asia Securities Forum were taken by the chairman of the local body hosting the annual meeting.

Hwang’s election came after he successfully hosted a number of global leadership roles for business groups that foster investor protection and education. 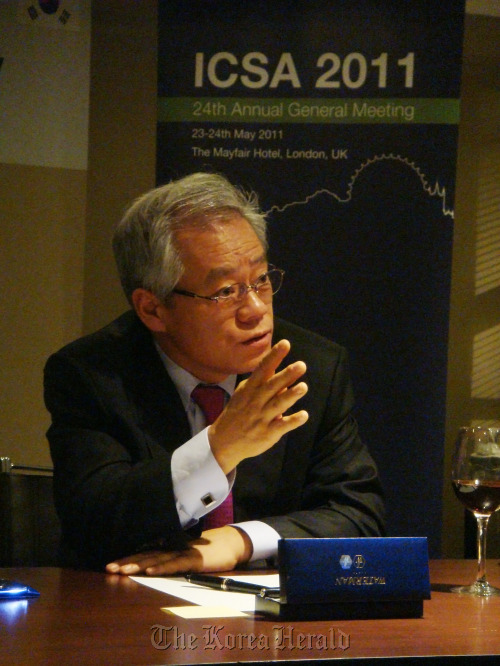 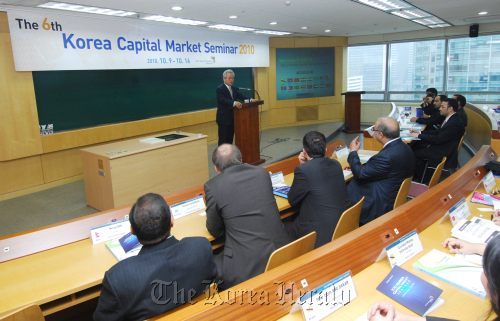 Veteran stock trader Hwang Kun-ho explains Korea’s financial environment to foreign investors at a seminar last year in Seoul.
In 2010, Hwang was elected as the president of the International Forum for Investor Education, an organization for nurturing professionals and educating investors. It consists of about 50 securities-related agencies from 30 countries as well as financial regulators and exchanges.

The election, which came in November, was also in recognition of Korean leadership in the international capital market ahead of Seoul’s hosting of the Group of 20 summit in 2010.

Under Hwang’s leadership, the IFIE conference in 2010 adopted a communiqu to deliver to the leaders of the G20 Seoul Summit. The IFIE last year hosted global conferences to bring together both the private and public sector, the outcome of which was delivered to the G20 leaders.

“I will add memberships from emerging markets including China, Mexico, India and South Africa and tighten networks with international regulatory bodies including the Financial Stability Board, The International Organization of Securities Commissions and the Basel Committee. I’m also going to put energy into nurturing finance professionals,” Hwang said.

He is scheduled to attend a regulatory meeting organized by the Basel Committee on Friday.

Hwang has been emphasizing that the core infrastructure of the capital market lies with investor education in the long run.

Understanding that manpower should be at the center of success at financial firms, KOFIA led member brokerages to design a recruitment system that offers attractive incentives and training programs.

Hwang, a veteran securities trader with over three decades of experience, graduated from Yongsan High School and Seoul National University and began his financial career at Daewoo Securities in 1976.

Before chairing KOFIA, he completed two consecutive terms as chairman of the Korea Securities Dealers Association from 2004 to 2009 where he worked closely with financial regulators preparing to enact the Financial Investment Services and Capital markets Act. Before that, he was CEO of Meritz Securities for five years, a top post he took after spending two decades at Daewoo Securities.

He was the first leader of KOFIA when the organization was established at the end of 2008 through the merger of three industry bodies. The previous three ― the Korea Securities Dealers Association, the Asset Management Association and the Korea Futures Association ― merged into one with the onset of the FISCA, a set of industry-wide deregulatory measures that came into force in 2009. The FISCA effectively eliminated regulations that prevented creation of new financial products and removed the barriers to free market competition in the country.

The merge was designed to grow Korea as a world-class financial powerhouse by bringing together the three industries and acting as a self-regulatory organization. KOFIA has been playing an important role in ensuring transparency and efficiency of over-the-counter trading. It runs the Bond Quotation System, which provides bid and ask prices in a real time basis for bond traders. It posts daily yields of 41 types of bonds and 371 closing yields, making bond trading a transparent process.