Korea’s online game industry is increasing efforts to dive into overseas markets in a bid to seize bigger business opportunities in the Internet era.

Well-known local online game publishers and developers, such as Neowiz Games, NEXON and Hangame, have said targeting foreign markets is a top priority for this year.

“We have no reason to ignore the overseas online game market as it has tens of thousands of potential players, for it continues to grow at a fast pace,” Neowiz’s chief executive officer Yoon Sang-kyu recently told local media.

Neowiz announced last week that it reached its highest quarterly earnings of 147.7 billion won ($136 million) in sales and 33.8 billion won in operating profit in the first three month due to sharply rising overseas business.

The firm’s total sales in the overseas markets recorded 70.3 billion won, up 141 percent from the first quarter of last year.

Largely due to its success in the Chinese market, the game has entered about 20 markets abroad, said Neowiz spokesman Kim Chang-hyeon. 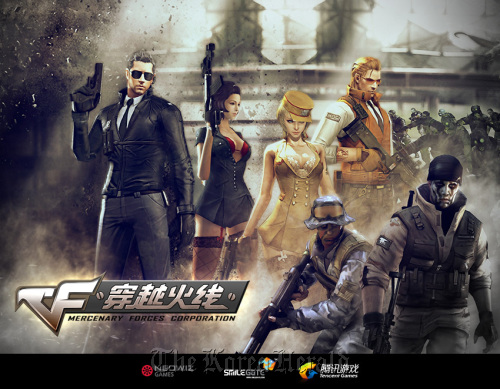 Neowiz Games’ top online game Cross Fire released in China.
“We’re first targeting the Asian markets, which are closer by distance and where the online industry is active,” he said. “However, the western and South American markets are not left out from our list since they have a fast growth rate.”

Currently, Neowiz has two overseas offices in China and the U.S. studying the market situations there and developing mobile applications. It also has a subsidiary in Japan which was created after a merger with Japan’s GameOn Co. earlier in 2007. The subsidiary employs over 250 people, said Kim.

NEXON, the country’s top online game company by revenue, has also branched out to 70 nations, recording an average of 30 percent growth per year.

The company has established offices in America, Europe and Japan and it is now attempting to gain more ground in North America with online games such as MapleStory. 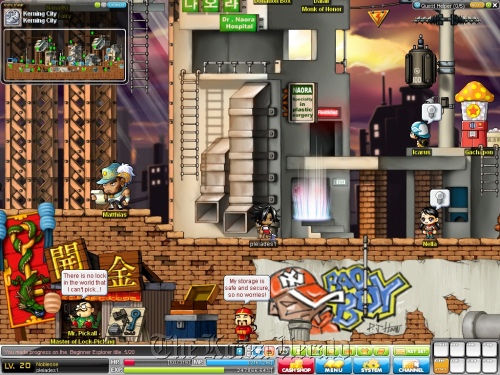 Online game MapleStory released by NEXON in the U.S. (NEXON)
Last year, the company’s overseas sales took up 64 percent of overall sales, showing the importance of its presence in foreign markets.

Hangame, a popular online game portal launched by NHN Corp., is also getting ready to release mobile games and is publishing games in Japan in the latter half of this year, said Hangame spokesman Lee Sang-hoon. Considering each country’s characteristics and culture, it will roll out global versions, in addition to local versions, of some of its mobile and online games, said Lee.

The company has three overseas offices in Japan, China and the U.S.

To support the move to reach beyond Korea, the Ministry of Culture, Sports and Tourism and the Busan Metropolitan City Government is hosting a global game exhibition called G-Star 2011 at the BEXCO Convention Center in Busan from Nov. 10-13.

At the event, participants will be able to try out online games, arcade games and board games as well as consol games displayed by over 300 game firms. Last year, a total of 316 companies from 23 countries participated in the exhibition.

Industry sources say G-Star is a place where game publishers and developers feature their latest line-up for the first time and make their names known. It is also the biggest trade show for the game industry.

Despite the industrial craze to debut in markets other than Korea, localization is the key to success, industry sources say.

“Considering that games are cultural content, localization is the biggest fate-determining factor for the foreign markets,” said Lee of Hangame. “It is important not only to offer contents that fit the sentiments of the people, but also to run services that match their taste.”

As an exemplary case, NHN hired a popular Japanese voice actor when servicing the Korea-developed games in Japan as part of its localization efforts.

Making an early move and picking the right partners was another strategy put into practice by Neowiz Games.

The Korea-based online game publisher partnered with one of the biggest firms known for online business in China and unveiled the game Cross Fire in 2008 after a year-long development period to localize the product, said its representative Kim.

“We’re continuously looking to meet such potential partners to target other markets for the partnership could bring the most optimized system and contents,” he said. “The situations involving the Internet networks and how people use their personal computers all differ by nation, however, we strive to make further efforts for localization by adding touches of changes throughout the process.”