In the fourth minute, Ronaldo beat goalkeeper Esteban Suarez in the 77th. The previous record of 38 league goals was set by Athletic Bilbao’s Telmo Zarra in 1950-51 and matched by Real Madrid’s Hugo Sanchez in 1989-90.

Ronaldo finished the season with a career-best 53 goals. Barcelona’s Lionel Messi has 52 going into next weekend’s Champions League final against Manchester United at Wembley.

Villarreal forward Giuseppe Rossi was tied for fifth in scoring with 18 goals. The New Jersey native scored 32 in all competitions.

“To score so many goals in a season is very hard. I have to thank my teammates,” Ronaldo said. “The (scoring title) is for them and the fans too.” 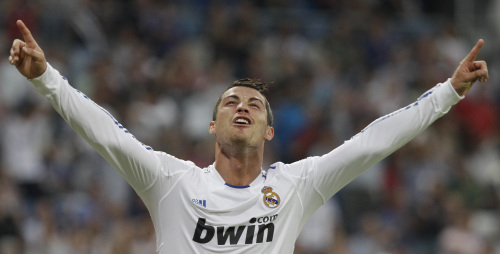 “We’re not here to grade ourselves, we’re here to play a game and that’s been impeccable,” Barcelona coach Pep Guardiola said. “Last year we had 99 points and this year 96 ― it’s absolutely ridiculous.”

Lionel Messi was among seven regulars left out of the squad to rest up for the Champions League final.

Deportivo La Coruna lost 2-0 to Valencia and was relegated to the second division for the first time in 20 years, joining Hercules and Almeria.

Neil Lennon ended a troubled first full season as Celtic manager with glory in the Scottish Cup after his side beat Motherwell 3-0 on Saturday.

Ki Sung-yueng and Charlie Mulgrew scored either side of Stephen Craigan’s own goal at Hampden Park.

“It’s an unbelievable performance from all the boys,” Ki said. “We are a little bit disappointed because we didn’t win the league, but before the game we said we would play for the fans and play for ourselves so we finish the season with a big trophy.

“We believed in ourselves and knew our quality was much stronger than Motherwell’s.”

Lennon has faced death threats, had parcel bombs sent to him and been attacked by a fan on a touchline in recent months.

The Northern Irishman took charge of Celtic in March 2010 and has produced the Glasgow club’s first trophy since the 2009 Scottish League Cup.

But in the Scottish Premier League, Celtic finished one point behind Glasgow rival Rangers, which won a third straight title.

“I want the big one on the CV, the sooner the better,” Lennon said.

However, there is no certainty that Lennon will be Celtic manager next season.

“I will sit down with the board hopefully this week or next and discuss if I’m the man to take the club forward or not,” Lennon said.

Schalke routed second-division side Duisburg 5-0 in the German Cup final on Saturday to claim the trophy for the fifth time and qualify for the Europa League.

Julian Draxler scored with a spectacular volley in the 18th minute, before goals in each half from Dutch striker Klaas Jan Huntelaar, and one each from Benedikt Hoewedes and Jose Manuel Jurado consigned Duisburg to its fourth cup final loss.

Schalke ― which finished 14th in the league and made it to the semifinals of the Champions League ― last won the cup in 2002.