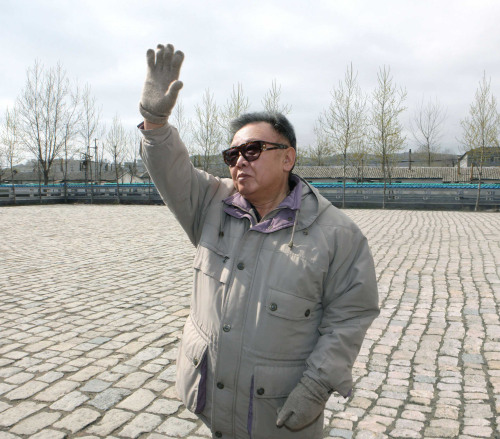 North Korean leader Kim Jong-il appears to be visiting China, a senior Seoul official said Friday, adding it was not confirmed whether he was accompanied by his son and heir apparent Jong-un.

“The current trip to China is being led by Kim Jong-il. We believe his third son Jong-un is not part of the delegation,” an official at the presidential office here said on the condition of anonymity.

The sole visit to China by Jong-un, the third and the youngest son of North Korea’s incumbent leader, would have been the clearest indication of Beijing’s approval over Pyongyang’s hereditary power transition.

A train carrying the North Korean delegation arrived in the Chinese border city of Tumen in Jilin province early Friday morning, and then appeared to be heading to Mudanjiang in northeast China, the source said.

The Unification Ministry here, which oversees affairs with North Korea, declined to make an official comment until the trip was fully confirmed.

The visit to China by the North Korean dictator comes as regional powers are escalating discussions over how to resume the multinational talks on Pyongyang’s denuclearization.

China, host of the six-nation denuclearization talks, has been striving to get the two Koreas to hold nuclear talks as the first step in restarting larger-scale negotiations. The six-nation dialogue, involving the two Koreas, the U.S., China, Japan and Russia, has been stalled since the end of 2008, fueling regional concerns over Pyongyang’s ongoing nuclear ambitions.

Regional powers have also been watching the succession in Pyongyang and the activities of the heir apparent with interest as it could lead to a sudden collapse of the North’s iron-fisted regime.

While North Koreans, who are kept isolated from outside news, have no choice but to approve of the three-generation dictatorial succession, many secretly question the abilities of the young heir apparent, those who have observed Pyongyang for years say.

Although it would not openly admit it, the South Korean government has been putting more weight on its reunification policies since last year, apparently noting the weaker leadership of the younger Kim in the North.

The senior Kim, who rarely travels abroad, made a visit to Beijing as recently as August, and the heir apparent had not accompanied his father then either, according to intelligence officials here.

An official trip to China by the North’s heir apparent would indicate China’s nod of approval over the reclusive state’s father-to-son succession and also cement his position as the incoming leader to the outside world.

The junior Kim, who is thought to be no more than 28 years of age, was first unveiled to outsiders in September, when he was made a four-star general and appointed vice chairman of the Workers’ Party Central Military Commission, which oversees the 1.2 million-strong armed forces.

Educated in Switzerland, Jong-un is considered to be the most ambitious among the North Korean leader’s three sons and resembles him the most in character.

Known to outsiders as “Internet-savvy and well-acquainted with weapons,” Kim Jong-un is largely believed to have been behind the recent cyber attacks against Seoul. Observers also fear he may lead a third atomic test to get international recognition of his country as a nuclear power by 2012.

The reclusive North Korean regime sees it as important to have its last-remaining ally China approve of what would mark its second hereditary power transition. Incumbent Kim began to rule his communist state in 1994, taking over from his father and the founder of North Korea Kim Il-sung.

Having suffered a stroke in 2008 and apparently still struggling with health problems, the incumbent Kim, 69, is making haste in having his youngest son take over the military and the people, a process that may be completed as early as next year, analysts say.