According to the Seoul Metropolitan Government, they are considering raising the base fare by 100 to 200 won to stem this year’s estimated deficit of more than 574 billion won ($530 million) for lines 1 through 8. 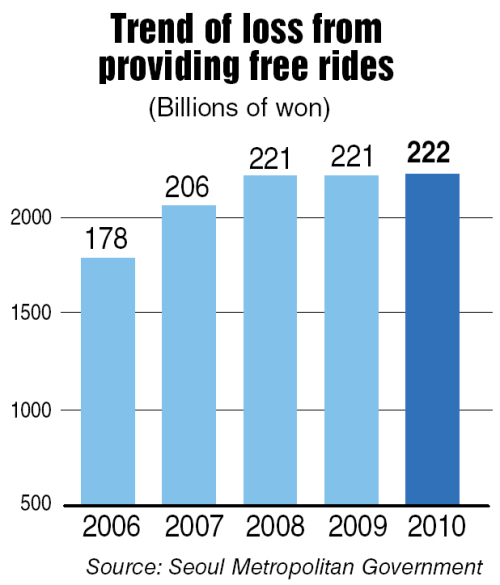 Seoul Metro, operators of lines 1 through 4 and the Seoul Metropolitan Rapid Transit, lines 5 through 8, estimate a combined deficit of more than 2.2 trillion won from 2007 to 2011.

“We are actively negotiating with Incheon and Gyeonggi Province officials about raising the subway fare, and have also proposed measures to the government about raising the age of senior citizens who may ride for free, or receiving compensation from the administration,” said city officials.

This will be the first price increase since April 2007, when the base subway fare was raised from 800 won to 900 won.

The city originally planned to raise the fare by 100 won every two years, but withheld the decision to raise prices in 2009 and 2010 after considering the economic downturn.

“Since there is nothing I can do about a price increase, I can’t say I am against it,” said a Seoulite who commutes from Gyeonggi Province everyday.

Officials are also looking to raise the age of senior citizens who ride the system for free, from 65 years old to 70.

This will help cut the loss from those who ride the system for free by 40 to 50 percent, which according to officials was over 222 billion won last year.

The subway system has lost more than 1.5 trillion won since 2006 to those designated to ride for free, including senior citizens, the handicapped and men of national merit.

“The average fair for an individual, including those who ride for free, is only 66 percent, 736 won, of the cost to run the system per person at 1,120 won,” said officials.

The official also said that reducing the deficit of the system is a clear indicator of why the fare has to be raised and that the loss due to those who ride for free is too high.