While stalling for time may have worked in the past, North Korea might have to come up with a different tactic this time as the South remains firm not to do it any favors until proper measures are taken in response to the casualties last year.

Turning a blind eye to the growing international mood to make peace with the communist state, the Seoul government made clear this week it will continue to block all shipments going into Pyongyang to keep the country isolated.

Tensions between the two Koreas, who are technically still at war, sparked even higher following the November bombarding of a border island Yeonpyeong. The two attacks killed 50 South Koreans.

“At this time, we cannot say when these measures (against North Korea) will be terminated,” an official at the Unification Ministry here, which handles affairs with North Korea, said Tuesday. 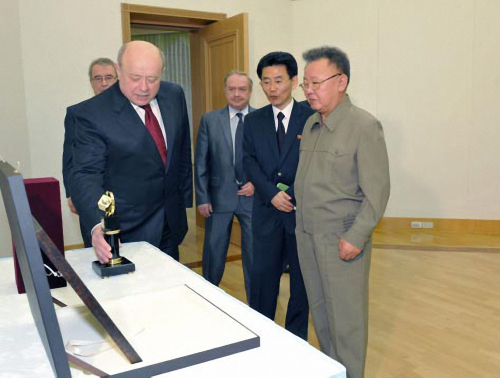 Mikhail Fradkov (left), head of the foreign intelligence service of the Russian Federation, shows a gift presented to North Korean leader Kim Jong-il in Pyongyang on May 17. (Yonhap News)
Another unnamed ministry official said the Seoul government “needs to see the North take some kind of action” that guarantees such attacks will not be conducted in the future.

“Aside from the actual effect, these measures have a symbolic meaning of showing the North it can no longer get its way by buying time,” he said.

Last May 24, South Korea announced a set of measures mainly aimed at financially isolating North Korea by shutting off trade and blocking its planes and ships from entering the country. It also completely suspended sending food to the impoverished state as of November last year.

Pyongyang, which has relied heavily on outside aid to feed its starving population of 24 million since the 1990s, is seeing a loss of at least $3 million each year due to the measures taken by Seoul, officials here say.

Inter-Korean trade fell by at least 54 percent and aid to North Korea dropped by 50 percent compared to 2009, according to state data.

While mending ties with Seoul would be its best way to avoid worsening poverty, North Korea has so far not been cooperative toward international efforts to have the two Koreas meet for proper talks.

South Korea wants the North to properly address its attacks in dialogue, but the communist state persistently denies involvement or accuses Seoul of making the first strike.

“Time is not on the North’s side. It is losing hundreds of millions of dollars each year by being stubborn,” a senior Seoul official told reporters on the condition of anonymity during a recent diplomatic forum.

Members of the six-nation denuclearization dialogue, involving the two Koreas, the U.S., China, Japan and Russia, hope to restart the talks by first getting the two Koreas meet for their own nuclear negotiations.

Pyongyang, which has often attempted to exclude Seoul in the aid-for-denuclearization talks, has not unveiled its position over the issue.

“There will not be any proper talks or reconciliation unless North Korea makes up its mind to do something about the attacks it made,” the official said.

The mood, however, is not together with the Seoul government’s staunch position, analysts say.

Washington, which has been backing Seoul’s policy not to recover ties with the North before it makes a proper apology, has been hinting at resuming aid and thereby restoring a direct dialogue channel with the communist state.

According to the U.S. and South Korean officials, Washington will soon send a fact-finding team to North Korea to determine the food conditions on the country.

Aside from the international pressure, local groups are calling on the government to do something to make up with Pyongyang.

On Tuesday, a Christian group here said it will go ahead with its plan to send food to the North regardless of the government’s policy.

Since taking office in 2008, President Lee Myung-bak in Seoul has been firm on not sending aid to Pyongyang unless it keeps to its pledge to denuclearize. After suspending shipments of food completely last year, Seoul has only approved of five civic groups to deliver food this year.

Other charity groups are joining the move calling on the government to abandon its sanctions against the North, claiming there are more important issues to address.

The National Council of Churches in Korea, which has announced it will send 172 tons of flour to Pyongyang this week, said South Korea “should not abandon the starving North Koreans for political reasons” in its press release.