“I have always liked this hairstyle, so I guess it naturally came across my mind as one of the options when I designed Flynn,” Kim told The Korea Herald with a chuckle.

Debuting as a Character Designer, Kim has designed many of the characters in “Tangled” including Flynn Rider, Mother Gothel, Maximus the horse, Pascal the chameleon and the Stabbington Brothers. He is the first-ever Korean to take such a big role at Walt Disney. Previously, he participated in creating designs for animations like “Tarzan,” “Chicken Little” or “Treasure Planet” as one of Walt Disney’s Key Animators.

Surprisingly, Kim never received formal art education. He wanted to go to an art school but majored economics instead because of his red-green colorblindness. Unable to give up on his dream, he knocked on the doors of local animation companies and one of them recognized his talent.

And in the mid-1990s when the animation business was expanding in L.A., he got an opportunity as an animator at Walt Disney. His inability to distinguish the two colors was not much of a problem because animators are supposed to make sketches in black and white.

For Flynn Rider’s character, the goal was to make it the sexiest and hottest male character ever in Walt Disney’s history, Kim said. 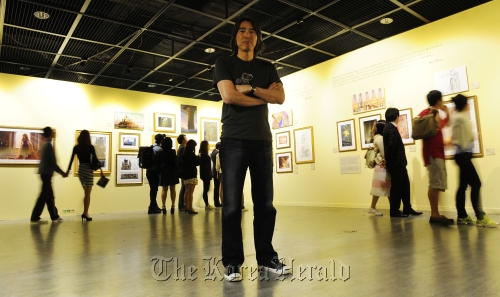 Kim Sang-jin at the exhibition “Dreams Come True: The Art of Disney’s Classic Fairy Tales” which is under way at Seoul Arts Center’s Hangaram Design Museum. (Park Hae-mook/The Korea Herald)
“We hung photos of many male celebrities in our studio and had our female staff to vote on their favorites. When we narrowed down the candidates to a few, the most voted one was David Beckham. So there might be a similar vibe between the two,” he said.

But the character that Kim feels most attached to in “Tangled” is Mother Gothel, because it took such a long time, about two years, to find just the right look for her.

“Mother Gothel is such a complex character. She has to be a mother so that Rapunzel will trust her, but is also a villain who uses her. It was not an easy mission to express all of that through design. We were struggling on it, and Alan Menken, a composer, played ‘Mother Knows Best’ (Mother Gothel’s theme song) to us. It was then that Mother Gothel’s image came up to my mind,” said Kim.

“The song is like something you would hear from a musical stage. So we created her image something like old Hollywood stars, wearing thick mascara and dark red lipstick. She is supposed to look elegant and wicked at the same time.”

It would be hard to find anyone who is not familiar with at least one of Walt Disney’s characters. The secret of creating such classic and long-lasting characters is being able to push the right buttons that appeal to viewers and make them empathetic, said Kim.

“No matter how great it looks, it is not an attractive character if people cannot empathize to it. So at Disney, we have three rules to make good movies ― good story, good character and good world. The world is the story’s background where everything happens, and it is important to make it believable. Enough to make people say ‘yeah, it could happen’ even when animals talk,” said Kim.

Multiculturalism, as can be seen from examples like “The Jungle Book,” “Mulan,” or “The Princess and The Frog,” is another peculiarity found in Walt Disney characters. In “Tangled,” Flynn is supposed to be East European or Hispanic.

It can be explained by Walt Disney’s efforts to globalize its characters as their animations are screened all over the world. But another reason is that there are artists of various ethnic backgrounds at the animation studio nowadays, said Kim.

“One of the former versions of our Rapunzel story included a multicultural Kingdom. The people there were wearing traditional costumes from all over the world including one decked in hanbok and wearing a ‘gat’ (a Korean hat). But then we changed the story because it seemed to be getting too complicated,” said Kim.

Kim said that animation companies in South Korea have their limits.

“In the case of TV animations, they are definitely world class. But in terms of feature-length big screen animations, there is still a big gap between their works and those by Disney, DreamWorks or Pixar. It is because they lack experience. But they should not be afraid of failures and keep on trying, and one day they will be competitive,” said Kim.

Kim’s next move will be “Reboot Ralph,” a video game-inspired animation flick scheduled to be released in November 2012.

Organized by the Walt Disney Animation Research Library, the exhibition arrived in Seoul after showcasing in the U.S. and Australia.