[ The Korea Herald – Send E-mail ]
Korea to provide paperless customs service
By 김주연
Published : May 17, 2011 - 18:34
Updated : May 17, 2011 - 18:34
The Korea Customs Service will add an electronic tracking system on goods to tighten supervision on transshipment while enhancing custom procedures for an economy increasingly opening up to free trade agreements, the state agency said Tuesday.

In a proposal outlining the agency’s medium-term goals, the KCS said it will adopt the new inspection system that applies minimal customs procedure for honest traders and a tougher one for trans-exporters and new traders. 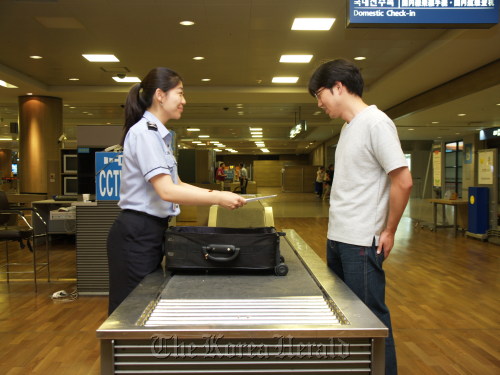 A Korea Customs Service worker inspects a traveller’s bag at Incheon International Airport. (KCS)
“With more free trade agreements coming, it is necessary to adopt a more efficient paperless system but one that filters out illegal transshipments,” a KCS official said.

“A growing number of overseas traders have been repackaging foreign products as Made-in-Korea to sell them at higher price in Europe and the U.S. We hope the e-tracking system prevents such cases.”

Dubbed e-Seal, the tracking system will be put on all items entering the country that need to be shipped to another port or airport. The agency will be notified as soon as the sealed items are opened for repackaging.

Things will be made easier for frequent, honest traders, the official said.

The agency introduced Authorized Economic Operator certificates in April 2009, which acts like a passport to pass through customs checkpoints with fewer or possibly no inspections anytime they arrive.

“We expect more than 10 percent of all exporters and importers to be certified with AEO this year and we see this increasing to 30 percent by 2013 as FTAs with EU and the U.S. go into effect,” the KCS said.

The total amount of imports and exports for Asia’s fourth-biggest economy is expected to exceed $1 trillion this year.

“Korea is one of the first to have adopted a paperless customs system and we exported it to six countries and earned $62.1 million. A lot of them are coming back to build a secondary unit or to learn more,” the KCS said.

The KCS has the top rating in airport customs service from Airports Council International in 2009 for the fifth consecutive year.