Two years ago, he applied for an early retirement when his company, an electronic appliances manufacturer, announced layoff plans.

At the time, the man surnamed Sohn believed he would soon find another job to utilize his experience as a personnel manager. But Sohn, now 53, still remains unemployed with his hope of getting a job ― even one much less paid ― fading away. 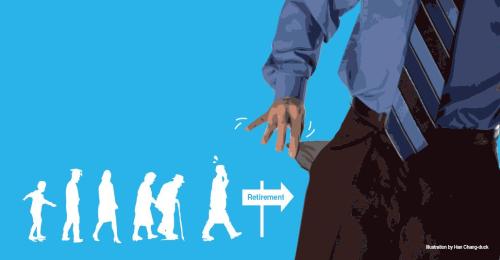 (Illustration by Han Chang-duck)
As Sohn sees the money he received in retirement pay dwindling, his worries are increasing over how to pay his two daughters’ college education and, though years away, the expenses of their weddings. Other than his severance pay, Sohn has very little savings as he invested most of his money in purchasing the apartment where his family now lives in western Seoul ― a decision he thinks was not “financially wise.”

He feels increasingly estranged from his wife and daughters. To avoid awkward moments with them, he tries to spend as many hours as possible outside the home, going mountain climbing or meeting his friends.

“I never imagined things would be like this,” said Sohn. “I should have given a harder thought to what I would do after retirement and how to cover household expenses.”

But he thinks he is still better off than some of his jobless friends who are supporting their parents. Sohn’s mother has lived with his elder brother since his father, a retired police officer, died years ago.

The problems facing Sohn and his friends are set to be shared by the baby-boom generation in the coming years.

U.S. demographer Landon Jones, who coined the term “baby boomer” in his influential 1980 book “Great Expectations: America and the Baby Boom Generation,” defined the span of the post-World War II baby boom as extending from 1946 to 1964.

In Korea, the baby-boom generation largely refers to those born between 1955 and 1963 in the aftermath of the Korean War that ended in 1953.

According to figures released by Statistics Korea last year, the number of people belonging to the generation stood at about 7.12 million, accounting for nearly 15 percent of the nation’s total population. Three in every four baby boomers ― 88.5 percent of men and 60.3 percent of women ― were engaged in economic activities. 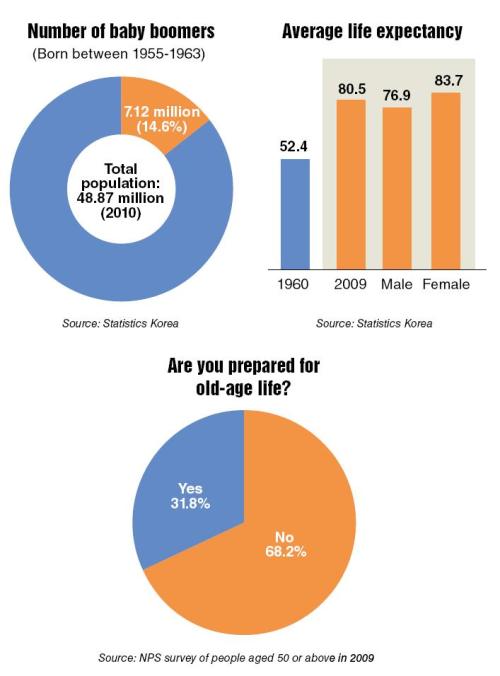 With those born in 1955 reaching corporate retirement age usually set at 55 to 58, an average of 500,000 baby-boom generation workers are set to retire every year through 2017, Employment and Labor Ministry officials forecast.

Many experts are highlighting the problems arising from the massive retirement of baby boomers, most of whom, like Sohn, are not prepared for life after retirement.

Coupled with prolonged life expectancy, they warn, the retirements could lead to a “social catastrophe.”

“The baby boomers are the last generation who consider it their duty to care for their parents and the first generation who cannot expect their children to take care of them,” said Woo Jae-ryong, who heads the Samsung Life Retirement Research Center. If no proper measures are taken, many retirees from the baby-boom generation will fall below the poverty line, he said.

In a 2010 survey of 3,027 baby boomers, over 51 percent of the respondents held themselves responsible for financially supporting their parents, while a mere 3.3 percent expected to be looked after by their children in their declining years.

The survey by the Korea Institute for Health and Social Affairs also showed that more than half of the baby boomers were willing to support their children well beyond adult age. Of those ready to help their adult children, 41.5 percent said they would do so until their children married.

The features of the baby-boom generation sandwiched between duties for their parents and children make it difficult for them to prepare for life after retirement.

A 2009 survey by a research institute affiliated with the National Pension Service found that nearly seven out of every 10 people aged 50 or above had made no effective preparation for post-retirement life.

Another survey by a Seoul National University research institute of 4,668 baby boomers, which was released in March, showed that they saved an average of 170,000 won ($155) per month while they thought at least 2.11 million won would be needed to meet their monthly living expenses after retirement. Their current household income averaged 3.86 million won per month.

Most baby bombers are increasingly aware of the need to prepare for life after retirement but have difficulties setting aside money for that purpose under the heavy burdens of educating their children and paying off mortgages, said Lee Chang-seong, chief economist at the retirement research center.

In a recent survey by the research center, nearly half of the respondents financially unprepared for their old age cited the cost of their children’s education (37 percent) and marriage (12 percent) as the main reasons for their failure to save money for life after retirement.

He said parents, long before getting retired, should begin talking with their children on the limit of the financial support they can provide. Lee, 48, said he has tried to talk about the matter with his son and daughter who go to high school and middle school, respectively.

“But they don’t seem to listen too seriously,” said Lee.

Experts are concerned that the predicament of the baby-boom generation retirees is likely to be prolonged and complicated as their life expectancy gets longer.

The number of senior citizens aged 65 or above is estimated to account for 24.3 percent of the population by 2030, doubling from 11 percent in 2010.

The prolonged life expectancy is likely to result in more baby boomers being plunged into poverty with the cost of medical treatments sharply increasing in their old age, experts say. Female senior citizens, in particular, are more likely to fall below the poverty line as they usually outlive their male spouses.

According to statistics from the NPS, over 35 percent of elderly households were below the poverty line in 2009, compared to 14.1 percent of all households.

“A large group of poor senior citizens will become a destabilizing factor for society,” said Woo, the head of the retirement research center. He stressed that serious social debate must be had as soon as possible to work out a scheme to ensure baby boomers will live a secure life after retirement. Woo said more efforts should be made to create more decent jobs for senior citizens in order to lessen the burden on the government and the coming generations.

The gloomy old days may be more painful for the baby-boom generation which is more educated and more inclined to regard itself as belonging to the middle-income class than previous generations.

The KIHSA survey of 3,027 baby boomers showed that more than 75 percent of them had a high school diploma or higher, compared to 11 percent of their parent’s generation. Nearly 90 percent of them put themselves in the middle-income bracket.

“Most baby boomers seem to be unprepared psychologically as well as financially for life after retirement,” said Woo. “They have a very weak vision for post-retirement life.”

Juch Myong-yong, who heads the Korean Association of Retired Persons, suggests that the retirement age be delayed by seven to eight years and education on life after retirement should be provided at least five years before reaching retirement age.

“In reality, such an education is offered just two to three months before retirement only at large companies,” Juch said. “Most small- and medium-sized companies, which hire more than 90 percent of the whole workforce, have no such programs.”

He emphasized that retirement doesn’t mean the end of life but a starting point for walking a new path.

“Retirees should try to find social roles regardless of their financial status,” said Juch. “People can feel completely secure only when they take roles in society.”

Experts advise younger generations to take on planning for life after retirement at an early stage to avoid the predicament facing the baby-boom generation.

“The sooner, the better,” said Lee of the retirement research center.

He cited the “caffe latte effect,” which means that if a young worker stops his or her daily habit of drinking a cup of premium coffee worth 4,000 won to 5,000 won and saves the money for about 30 years, he or she would save nearly 200 million won.